Start a Wiki
Princess Jewel The Hedgehog is a fictional, anthropomorphic teenager from the Sonic The Hedgehog series, who serves as the entire Mobian royal family. Her parents are deceased making her the only royalty left. She's normally seen around Sonic and his friends and helps them with the battle for her kingdom. When she has free time she's normally seen either playing an instrument or singing.

Jewel is one of the main females in the Sonic The Hedgehog series, and one of the few heroines in the series. Her original design was actually a yellow hedgehog with blue hair. Her creator, Julia Dixon (psuedonym), wanted to make a new character, so she went ahead and started to draw. The finished result was the Jewel of today, but she didn't start out as Jewel. She actually was unnamed when first released to the public, but she recieved more liking than the original Jewel. It was then that the original was scrapped and the new one became Jewel.

Jewel questioning Sonic if he truly needs her help.

Jewel as a pony 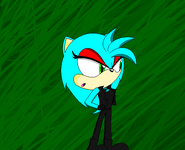 Origin in the Green Hills

Jewel's first appearance was in the original Sonic The Hedgehog. After defeating the boss of every zone but Final Zone, Jewel is seen running onto the screen, believed to be running after Sonic. He then points to the right side of the screen, and the two run the same direction. In Scrap Brain Zone, however, when Sonic is sent off to the recreation of Labyrinth Zone, Jewel is standing at the position to where she doesn't fall with him. When Sonic confronts Robotnik for the final time, Jewel is seen behind a glass wall throughout the entire fight, presumably being held hostage. After the fight is over, the glass wall rises, releasing it's prisoner. After returning to Green Hill Zone, Jewel rewards Sonic with a little kiss on the cheek, and when Sonic jumps toward the screen, Jewel is waving in the background.

Started as a Search

In Sonic Heroes, Jewel (Speed type and leader), Stella (Flight type), and Kira (Power type) are seen together. Jewel tells them that if they help them search for her parents, she'll help them with anything. The two girls say they'll help her, and they set off for a new adventure. They find that the Seaside Hill is full of Eggman's robots, and decide to track him down first, and search for Jewel's parents later. They confront Eggman, and after deafeting him for the first time, they confront, in order,  Team Rose, Team Sonic,  Team Chaotix, and Team Dark. They confront Eggman one final time in this adventure, and defeat him. The three collected two emeralds in this adventure, and decide to use them to power Jewel's super computer, A.T.I. They power it up and ask it why Egmman really had robots everywhere. With a little hacking A.T.I. told them it was to stop them from destroying his new "ultimate weapon." They decided to warn everyone else about the unknown "ultimate weapon" and try to team up to stop it. They end up with Team Sonic thinking it's a joke, Team Rose saying that there was no possible way to get into Eggman's fortress, Team Dark declining because Shadow says he just couldn't stand being teamed up with Jewel, and Team Chaotix because Jewel's team wouldn't pay them. They try to put the weapon out of commission, but cannot because the ultimate weapon is Metal Sonic, and Metal Sonic is a robot. Thinking they're finished with their adventure, they return home, not knowing that Metal is more powerful than they thought.

Return to the Green Hills

In Super Smash Bros. Brawl, in the Green Hill Zone arena, Jewel can be seen running through the shuttle loop along with Tails, Knuckles, and Silver. It is her only appearance in the game.

In the Sonic Riders series, Jewel is only playable in multiplayer mode. Her gear is named the Flaming Flyer, and shares the respective colors of fire, red and orange. In this series, Jewel wears a shirt like the one she wears now, only with white stripes on the top and bottom. She wears a pair of shorts designed the same way, and the same sneakers and gloves.

Jewel was in all four of the Sonic TV shows, and is going to be in the upcoming TV series, Sonic Boom. Jewel was a princess in Adventures of Sonic the Hedgehog, Sonic X, and Sonic Boom, but in Sonic SatAM and Sonic Underground, however, Jewel was not royalty. This was due to there already being princesses planned.

Adventures of Sonic the Hedgehog

In Adventures, the first show, Jewel's mainly just trying to help Sonic and Tails fight against Robotnik, mainly by being the technical whiz. She says she'll help them, but only untill her kingdom is rightfully returned to her.

In Sonic SatAM Jewel was but a normal Mobian, because of the character Princess Sally. Instead of royalty, Jewel's one of the freedom fighters, and one of the few heroines in the show. She's got her right arm roboticised in this series, and the only time it's ever seen again is in the Archie Comics and in Sonic Underground.

In this show, they mainly change almost everything about Jewel. In this show she's one of Sonic's "resistance buds", mainly as it implies, because their friendship was born in the resistance. Jewel was raised in sanctuary and as such spent her entire life fighting against Robotnik. She was never really a big fan of Sonic's sister, Sonia, and mainly found joy come out of hanging out with the boys. This normally flute playing hedgehog may be completely different, but her appearance remained the same, and most of her personality stayed the same.

Jewel is known as a pyrokinetic hedgehog. All members of Jewel's family that is, was, and ever will be has possessed fire in their veins, thus becoming a power. It is also referred to as Blaze's most notable power.

Jewel is an astounding master of technolology. Tails taught her about everything she knows, but she learned a thing or two from her father. Her I.Q. is about 200, meaning not as smart as Eggman or Tails, but smarter than most other characters.

Retrieved from "https://sonicfanon.fandom.com/wiki/Princess_Jewel_The_Hedgehog?oldid=1800722"
Community content is available under CC-BY-SA unless otherwise noted.