WARNING: This is a joke and not to be taken seriosuly, this character is never to be used AT ALL and if it leaves this page, it will only be used as a joke. 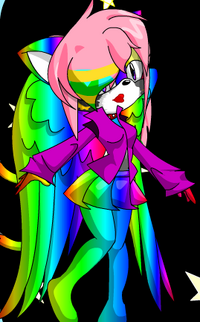 Princess Hawaii Forseaishi Kitten Istality The Third was a perfect Sonic character, and she was going to make a appearence as a playable character in Sonic 06, but she was banned for being too good a character. She is an amazing, beautiful character who is under the synonym section of 'perfect'.

Princess Hawaii Forseaishi Kitten Istality The Third is the most popular person ever. Everyone loves her and she catches the intrest of Sonic, Shadow, Silver, Knuckles, Tails, Espio, Vector, Big, Charmy, And even a few females. She is very rich because not only is she a princess, but her work job is as a plumber. She is the richest girl in the world and everybody loves her.

Princess Hawaii Forseaishi Kitten Istality The Third's powers are better then every one elses. She can control every element in exsistance and can stop Eggman by breathing. She can turn into Super Mary-Sue, I mean Super loveable Mrs. Intresting, by only breathing. Not only that, but her normal form is stronger then Sonic, Shadow, Silver, Tails, Knuckles, Amy, Cream, Blaze, and Rouge's super forms combined. She also has the powers of Invisibility, Flying, Strength, Super speed, super smarts, teleportation, fire resistance, and the ability to shoot lasers.

Her weapon is three Piko Hammers! though she really does not need one because she is so strong by herself.

Princess Hawaii Forseaishi Kitten Istality The Third, has a long tragic history. When she was born her house was bombed, they moved to somewhere new and Princess Hawaii was seperated from Amy by... TOAST! After that her family was killed in front of her by Eggman, who couldnt kill her too because-- She was immortal. After that she went to school and graduated with straight A +'s. All the animals congradulated her and gave her a magic potato chip that allowed her to summon a animal when she needed one.

Afterward Princess Hawaii became even more awesome and beautiful, she then married Sonic and had to kids named Marty and Stewart. But this was not a happy ending, as both her kids were slaugtered by eggman! much stronger then before, Princess hawaii led a great war against Eggman. during the war many things happened. Everyone except for her and Sonic died. Hawaii was heart broken and she afterward tried to be happy.

But she was never happy again. The next day someone viciously attacked Sonic, giving him a broken leg. After that Hawaii lost it and went on a shopping spree.

Everything is Princess Hawaiis Strength. She gets strength from breathing. Sometimes she gets energy from others too. Shhhh its a secret.

Uhm... what? Princess Hawaii has no weaknesses. She is a living weapon full of power and strength. NOTHING CAN BEAT HER.

Retrieved from "https://sonicfanon.fandom.com/wiki/Princess_Hawaii_Forseaishi_Kitten_Istality_The_Third?oldid=1752339"
Community content is available under CC-BY-SA unless otherwise noted.