BlackFelineDarkness, the author of Princess Akira Gadget, considers this page to be unfinished. As such, some sections may change.

Akira Gadget(Akira Gagetto) is a 15-year old anthropomorpthic squirrel who lives in Mobius and appears in both Sonic Archie Comics and the main gaming-franchise. She is also one of the main protagonists in the comics and games and is also featured in many games. Akira is also one of Sonic the Hedgehog's closest friend, girlfriend, and future wife. She is known to be "The Greatest Hacker of All Time". 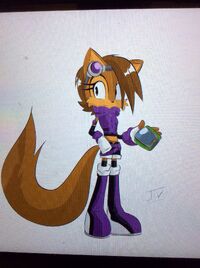 Akira was supposed to be the remake of Sally Acorn, also re-creating a new girlfriend for Sonic. She was originally named "Grace" but was later on named "Akira" because she was all "bright, intelligent" and "clear". Coming to her appearance, her attire looked more like Sally Acorn's new design(Post-Super Genesis Wave) having to wear blue vest, boots and shorts. The creaters thought that if they get rid of Sally, then others will not be happy, so they kept Sally and made a new attire for Akira.

Akira is a very shy girl but always knows her ways of through fighting and when she is in difficult situations. She can be very sensitive at times, and very immature, but has always wanted to just be like Sonic the Hedgehog.

Akira was actually the real Princess of Mobius, since she appeared in the Freedom Fighters group. But, she didn't realise that she was the actually Princess until NICOLE had scanned her data. As a baby, she was taken away to live happily with her life on the busiest cities of Mobius where she cannot be found or spotted by the Acorn Family. Sally, jealously, lied that she was the one who was trying to get over-thrown by Akira's family. But as NICOLE had shown Sally that Akira's data was found in one of the royal technology in the Acorn Kingdom. Sally, was then given "gulity" for her family violenating Mobius and her rulars. Akira was then crown as the current rular of Mobius.

Retrieved from "https://sonicfanon.fandom.com/wiki/Princess_Akira_Gadget?oldid=1536617"
Community content is available under CC-BY-SA unless otherwise noted.