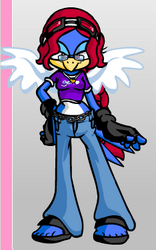 Prez is slightly known for being a Mephiles fangirl.

Prez was born on Green Hill Zone and was brought up by loving parents, Donna the Mockingbird and Eric the Jabberjay. She had three younger brothers; Ron, Nekro, and Peeta. They lived together happily until one fateful day, when Prez met an Oshawott near the edge of GHZ. She was about 8 at the time.

Her family let her go, as they could see it was her destiny. Prez became a nomad and was happily living on the run, defeating Gym Leaders, until three years later.

Prez was a nomad until she was about 11, and she found a home in Soleanna. She loved it there, with all the water and such, so she moved into an apartment near where the parade was held yearly. From there, she trained her Pokemon and raised through the ranks to League Champion.

Prez is mainly a Pokemon Breeder. She still lives in Soleanna and still loves Pokemon. Occasionally, Prez will make new friends, but they always leave her when they learn a certain dark secret of hers: She is a descendant of Satan, making her 1/14 demon. Prez is one of the major troublemakers for G.U.N, as such, is among their main targets.

Prez has light blue feathers (some of them have shiny silver or gold tips). She has shoulder-length curly bloodred hair and a white belly. Prez's hair is normally kept held back by a black headband. She has two long feathers that look like two tails. Her eyes are red, her eyelashes blue, and her eyelashes thick.

Prez is aerokinetic and necrokinetic, meaning she controls darkness and air. She can fly up to 200 feet high and up to 400 miles an hour (she is third fastest flier on Mobius), and manipulate the wind to her will. Sometimes, she can use darkness while in the air, though this wears her energy and would make it easy to crash. Prez is also a passionate and amazing writer.

Prez, when around strangers or people she's not comfortable with, can be shy, nervous, and overall passive. She is mostly honest, but when she's in a bad mood can get sarcastic. She tries to avoid swearing, using terms like "Apple". Prez, being clever and fast, has a somewhat cocky attitude most of the time. She is mostly a tomboy, but when people call her a "he", she gets offended and you better start runnin' if that happens.

Prez's G-Switch, Pred
Add a photo to this gallery
Retrieved from "https://sonicfanon.fandom.com/wiki/Prez_the_Mockingjay?oldid=1799705"
Community content is available under CC-BY-SA unless otherwise noted.