The author of Platinum Foehn considers this page to be unfinished. As such, some sections may change.

For some reason, I really like this character. Maybe because he’s a Yandere. This is Rosebud‘s male counterpart, but he’s a million times better if you ask me. If you like him, GREAT! If you don’t, that’s okay. I BELIEVE IN OPINIONS! (Amazing, right?)

Hedgehog (CLICHES TO THE RESCUE!)

14 (is immortal. Can only die of unnatural causes)

Plat (by Andy and almost all users.)

When Andy yells at him

Platinum is shy and fearful. He isn’t too good in most social situations, but when he does come out of his shell, he’ll treat you with respect and honor. He is also very creative and responsible, practically taking care of his friends, even when they don’t need it.

Platinum was created under the name Project: Friend, as he was to keep a girl (named Leah) company when she was lonely. He was created on her fifth birthday, and was given as a present. Leah cried with happiness, as she finally had a friend. He was called Tomo (short for “Tomodatchi”, the Japanese word for friend). However, he hated the name, and started to cry in demand of Leah picking a new one. She then thought of Shiny, but he hated that name, too. She finally named him “Platinum”, and he was satisfied.

About 2 years later, Leah’s father thought that maybe Leah would like it more if she had a friend that was a girl. Leah denied this at first, saying that she loved Platinum very much, even if he was a boy instead of a girl. After a few weeks, however, she then said that maybe having a female friend wouldn’t be so bad, but Platinum would still be her best friend. This came to the creation of Skye, Platinum’s younger sister. However, she had a strange defect which made her have aerokinesis. Platinum was happy to have a younger sister, as (at the time) he found aerokinesis as a fun toy to play with. He didn’t know that aerokinesis was a very strong power, and thought that it was just a game.

No Longer a Game

One day, when Plat was around 8 years old, he was playing his aerokinesis game with Skye. This time, she was trying to make him fly. This didn’t work, but it was worse than expected. He ended up flying into a brick wall, causing him to get brain damage. He started to get amnesia, forgetting all his favorite and least favorite memories. It took him about two years to fully recover. (This is what also makes him fearful, and he had a temporary fear of heights.)

At around this time, Platinum started to regain memory. It was also at this time when he met Lilac, who had also made a mistake (a worse one). At first, they thought that they would never get along, but they started to grow closer together.

”Stay away from Rosebud!” When someone harms Rosebud or if someone has a crush on her.

“Lilly! We’re just friends!” When Lilly (another OC. Work in progress) insists on dating him.

“I’m not so sure about this,” Platinum going into battle.

Platinum with Lilac, drawn by Xoph 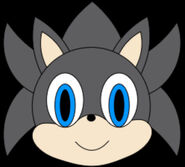 A Platinum emoticon, drawn by Lucent
Add a photo to this gallery

Retrieved from "https://sonicfanon.fandom.com/wiki/Platinum_Foehn?oldid=1877831"
Community content is available under CC-BY-SA unless otherwise noted.