Nikki-Kaji, the author of Piper the Sugar Glider, considers this page to be unfinished. As such, some sections may change.

I know people feel down now and then because they may not fit in. But you have to fight it! It's impossible to be someone you're not and make it work; it actually makes things worse. If you learn to love your true self, you won't feel alone anymore. But, for now, if you're feeling a little lonely, i'll be right here for you. Every step of the way. 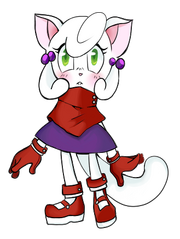 Piper is a 10-year old mobian female Sugar Glider gifted with the power to glide freely for extended amounts of time. She is a skilled flute player and enjoys going on adventures with her brother and friends. Piper is a member of Team Amity; a group consisting of Sarah The Cub, her brother, Caleb the Sugar Glider, and herself.

Piper is a 10 year old snow-white Sugar glider. Her eyes are emerald green, and she has two lashes on each eye of her separate eyes. Piper is around 2 1/2 feet and weighs 31 pounds, which is average for a young, female Sugar Glider. She has a small, pink nose, but no muzzle. Her hair only reaches to about her shoulders, curling up towards the front of her body on each side of her shoulders. Her large, fluffy bang also curls upwards in the center of her head, not covering much of her eyes. On Pipers arms are her patagium; a feature that all Sugar Gliders have that allow them to glide in the air. Her tail is about a foot in a half long, which also supports her ability to glide.

For clothing, Piper wears a sleeveless purple dress that extends outwards from her waist, similar to Amy's. Covering most of her upper body is a long, red cloth scarf, pinned up with two silver buttons. This scarf is buttoned up tight enough to not slip off of her neck, but still allow Piper's arms to extend out and glide freely. Piper's gloves are also read, neatly cuffed with a white stripe along the wrist section. Her red boots have a strap across the middle and are cuffed with button designs and small, white heels. In her hair, she has two purple bobble hair ties wrapped around each curl.

Piper is a somewhat quiet girl, but still loves to venture out into the world around her with her friends. She's not usually the first one to introduce herself to someone new, but will slowly open herself when she gets to know them. Piper is also not easily discouraged, and will continue to do her best to get things accomplished. This sugar glider is not a very strong fighter, and does not like fighting others, which is why she sometimes relies on her friends when they encounter danger.

Piper can also be described as innocent, as she would never try to hurt anyone if it's not necessary. She doesn't like seeing others getting angry at each other and starting fights, and sometimes even tries to stop them.

Piper and her brother grew up close together, and actually got along pretty well. They were very playfully, and loved gliding through their rain forest city, Regenwald. These siblings did not grow up with parents, and instead relied on each other for protection. Piper was not much of a fighter, and had a hard time befriending people when she encountered them. Her brother was much different from her. Reckless and loud, making lots of friends, and didn't mind getting his hands dirty. Despite their differences, the siblings seemed to work together and get along very easily. They understood one another and always supported each other no matter what.

While Sugar Gliders cannot exactly fly like birds, they can stay up in the air for extended amounts of time by using their platagia. This is a stretchy, flexible layer of skin connected to their arms that enable them to glide easily. Piper uses her gliding ability a lot, and also uses a method that allows her to gain height. While gliding, if Piper dives straight down and quickly pulls upwards, she is able to shoot into the air at extreme speeds, gaining momentum as well. If these dives are timed well, they can be used as a way to fly as high as she would like at an easy pace.

Piper has a very big interest in music, and has taken interest into learning how to play an instrument. She has practiced how to play the flute since she was 5, and was a natural at it after taking the time to practice it. She currently has two flutes: a silver one that she got herself, and a bamboo one that was said to be her mother's in the past. The silver one is cleaner and easier to use, but Piper prefers to use the bamboo one because she says it plays a more beautiful tune. Sometimes, her brother plays his ocarina while she plays the flute, which they sometimes do to calm themselves or others.

Piper and Sarah first met while the Sugar Glider was venturing around Mobius in search of adventure. Sarah was the first child that Piper has encountered when arriving in Spagonia, and requested her help after admitting to being lost. She told Sarah about how she had lost touch with her brother, and he was the only family member she had left. The bear cub had quickly accepted the sugar glider as a friend, and agreed to help her. She allowed Piper to stay in her aunt and uncles household for a few days while they got ready to venture out.

Retrieved from "https://sonicfanon.fandom.com/wiki/Piper_the_Sugar_Glider?oldid=1651608"
Community content is available under CC-BY-SA unless otherwise noted.