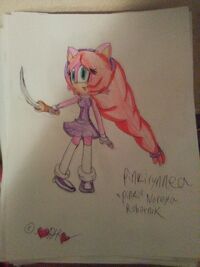 This is an article about my first Sonic OC, Pinki the Hamster. More info will be provided as time goes on and I develop her a bit more. Yeah, so enjoy!

Pinki is a medium-pink hamster with red hair, turquoise eyes, magenta fur on her chest and torso. She has peach skin, two cheek tufts on either side of her face, and her hair is very long and is kept in a single ponytail that resembles Sticks's. Her outfit consists of a purple headband, a purple and white top resembling a shorter version of Amy's dress, a purple miniskirt, white socks that go to the thigh, and shoes that resemble lower versions of Amy's. She also wears fingerless gloves with silver bracelets. Her hair frames her face, and she has three eyelashes on each eye.

She has also been seen wearing a green long-sleeve T-shirt, brown boots, and blue jeans; her hairtie is green when she wears this outfit, instead of it being purple.

Most recently, Pinki's design features her wearing black-rimmed glasses on and off. She has also been seen in pigtails, tall white socks, navy and white short shorts, black Converse-style shoes, and a green top with the sleeves hanging down in a sloppy manner.

Pinki, in a few simple words, is kind of a jerk. She's really a total tsundere, to put it bluntly. She's a nice person if she knows and trusts you. If she doesn't know you, she will just ignore you and/or start to feel uncomfortable. She's also remarkably nicer around her friends than when around strangers; it has something to do with her trust issues.

This will be explained in detail on a separate page, but I will provide a brief rundown

Pinki was born on Space Colony ARK. She lost her mother at age 4, and started learning swordsmanship at age 7. She and Shadow briefly were together for the longest time, but she broke up with him (and slapped him too!) upon finding out he was in love with Sonic. However, she got over it quickly soon after meeting Infinite Blitz Midnightt, who she quickly developed interest in. That interest soon became a form of love, which confused many of her friends upon them finding out.

Pinki has limited ESP. She can use it to move objects, read minds, and -if necessary- wipe memories. She's proud of her abilities to do all those things.

She has psychokinesis, the power to move objects with her mind without touching them.

She has telepathy, the ability to communicate mentally or read minds.

She has the ability to erase memories and that's pretty much self-explanatory.

She knows martial arts (karate) and she can use a katana. This is partly because her ESP helps her with the martial arts, and because hamsters are sassy in real life, so there's really nothing else to say about that. She's also pretty good at cooking.

Shadow Gerald Robotnik: Her ex-boyfriend, and they're childhood besties. She was one of the few people who helped him when his father nearly murdered him.

Sonic and Co.: She's good friends with all of them.

The rest of The Crew: Childhood besties as well.

Infinite Blitz Midnightt: Her current boyfriend, and she was the one who found him shortly after he went into hiding and brought him out of it. He went from being distant towards her, to becoming almost close to her, until he discovered that she was too important and he now goes all yandere on anyone who dares to touch her.

Dr. Eggman: Somehow they're "frenemies," and nobody knows why.

Rubi Marie Urufu: Another childhood friend; Rubi is a bit dry compared to Pinki, but they've managed to be close despite their differences.

Blua Jane Robotnik: Pinki's older sister that acts like any other older sister. With the only exception being that Blua acts like she's better than her sister, when Pinki's the one who has the most friends.

-Her favorite color is purple, despite her name being Pinki.

-She loves ramen; it's her favorite food. She also loves pizza and doughnuts.

-She refuses to get a haircut, for some odd reason.

-Her sword was given to her by her deceased mother when she was a child. She's been using her sword ever since she was seven.

-She gets mad when someone other than Infinite flirts with her; so does he.

-She likes to listen to music on an endless loop sometimes.

-If you ever make her mad enough, her eyes will grow pale red.

-She can cook, but prefers to eat out.

"So, what's the big deal? Both the guys I've ever dated have almost destroyed the world. No biggie, ya know-!" -when someone tells her about their boyfriend/girlfriend

"Dude! What makes you think I'm into you?! I have a boyfriend!" -when someone flirts with her

"...Whatever. If you think I'm mean, then good on you. You're just not my friend, and the way you act, you never will be!" -when someone she doesn't know calls her mean

Retrieved from "https://sonicfanon.fandom.com/wiki/Pinkirynnea_%22Pinki%22_Robotnik_the_Hamster?oldid=1838940"
Community content is available under CC-BY-SA unless otherwise noted.