Pink Sakura (formerly known as Prunus the Seedrian) is a character and the main antagonist of Sonic the Hedgehog: Crystals of Soleanna. He is Yoshino's husband and Blossom's father until he became evil after some of his enemies made fun of him because he looked "way too pink" for a Seedrian male. 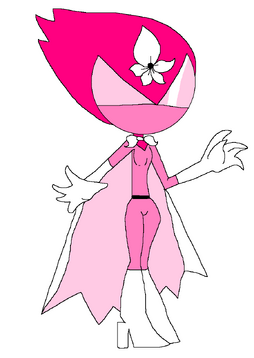 As Prunus, he had pale skin, slanted eyes and semi-long black hair with two blossom "horns" sticking out and long beard. He wore an armour-like outfit, with white shirt with golden gloves with a long red cloak. His gemstone was fire red and was shaped like a diamond, located at his chest, just like his wife and daughter.

When Prunus becomes Pink after being sick of being bullied, he wears a rose pink mask with a large diamond gem in the middle to hide his true identity. He also wears cybernetic features which covers all of his "beautyness".

Before he became Pink Sakura, Prunus was a kind and friendly man who wanted to help every people in Green Gate, and wanted to be with other people. However, he has undergone a lot of bullying in the past, ever since he was 6 years old, he was beaten up and teased by his classmates for being "way too pink", which made him to what he currently is now.

Pink when he was still Prunus.
Add a photo to this gallery

After he became Pink Sakura, his personality changed to a cold, evil and ruthless dictator who wants to seek revenge of those who made fun of him in the past. All he wants to do is to have all the Infernal Crystals so he can have the power to destroy Soleanna.

Born and raised in Green Gate, he went to a lot of academies and schools to study monarchy, until he was bullied by people older than him and beaten up by different students. As an adult, he decided to become an artist, so he took his way to a higher state until he met Yoshino and they got married and had a daughter named Blossom the Seedrian. However, Yoshino actually sacrificed herself to give birth to her only child. When the war broke out, he had to take care for her and when they crash landed on Mobius years later, he gets made fun of his pink colour again, but by different species. He becomes Pink Sakura and dominates Soleanna.

Retrieved from "https://sonicfanon.fandom.com/wiki/Pink_Sakura?oldid=1650982"
Community content is available under CC-BY-SA unless otherwise noted.