View source
This is an article about Pilot the Blot, a character created by Megaphantaze on 04/8/2014.

"I may look like a monster, but my teeths are designed to bite evil like a bulldog"

Pilot is a whole black humanoid(No relations to normal black people), who has beast's mouth looking mask. Pilot has used to mask so well, that he even forgets it on and this way may give creeps for people. His attire includes Pilot's hat, red tuxedo and black pants with red shoes. He also has eyeglasses, since he is blind. His monocles are updated to give it's user an ability to see, if he/she is blind.

Pilot likes to help people by doing inventions. He is also intelligent and has knowledge about technology and robots. He is also energetic person, who gets sadly angry easily.

It all started from a master criminal and princess, who married each other. Due to their different genes, their son was unique. He had passion to inventions, machines and flying like his father, who had also the nickname of the mad scientist due to his imaginative plans and inventions. The couple decided to call their son as "Pilot the Blot"'

When Pilot grew up, he started to run a company, which makes inventions to make his dream come true as a city's best inventor. In an age of 26, Pilot founded an army called S.C.Y.L.L.A, which he uses to protect his country. But during his growing, he made a gun, which supposed to morph things. He shot into mirror and the beam hit his mouth. he ended up to have raptor mouth, and the gun got broken.

Then he faced his ultimate enemy called Yukon. During finding a solution to defeat this robot emperor, he found Sonic the Hedgehog and Blaze the Cat. With the help of these two and their friends, they will destroy the new evil.

Pilot grew up with high IQ, which makes him clever with few lags. He can also build machines, weapons and even robots. He has even done his own robot masters, which got stolen by various thiefs like Kabo the Bomb, who used them to create a giant bomb to destroy a whole city.

Pilot feels lonely sometimes, but he has some characters he likes: He has returned to adore Tibleam the Chimera after breaking up with Fiona.  Another good friend of him is Cherry the Wolf. Pilot and she gets used to each other well and they sometimes meets each other. Pilot feels strong responsibility to Cherry, when she is with him

A candy cane got from King Omar during his business trip at Magemake land known of it's sweets.

Lordi: Would you love a monsterman 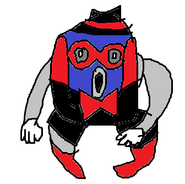 Pilot's last name comes from the fact, that he was created originally as a descendant of the Phantom Blot called villain, who retired from his world-domination plans.

Pilot's real name is an anagram of his creator's name (can you guess what is it?)

Pilot is creator's first character to have two versions in active use.