Fifi, this is a... private moment! Could I at least go to the bathroom without you interrogating me? 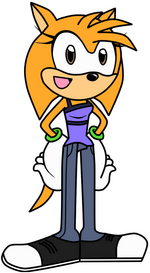 Phoebe the Wallaby is an original, Selective Yellow, anthopomorphic, female, Agile Wallaby created by pumpituppartyzone. She was originally made on Sonic Charrie Maker, and drawn from scratch. She is currently in a relationship with Razz the Bear. She secretly admires Fifi the Bear, but Fifi considers Phoebe her rival. She is good friends with Maxie Flippercorn, but her best friend is Petunia the Porcupine.

Phoebe is a fairly nice person, but keeps a lot of secrets. Unfortunatley, she is not a very good liar. When she lies, she is very similar to Riley Daring. She is considered very mysterious by Max and Moe Flippercorn, although Max means it in a good way and Moe means it in a bad way. Phoebe is very nice, and likes to help people, but Moe usually questions her, which makes her uncomfortable. Phoebe especially likes to help people train and practice fighting. She also likes to race people, mostly because of how fast she is.

Because she is a wallaby, Phoebe is extremely fast. She can also kick very hard. In fact, she has some of her own moves, such as Spin Pounce, Wallaby Pounce, and Phoebe Kick. Those attacks are fairly effective. Phoebe can also do most of the common moves of Speed type characters, such as Homing Attack, Spin Jump, and Spin Kick. Phoebe can jump very far and very high, and is very agile. Coincidentally, she is an Agile Wallaby. Phoebe is also good with martial arts; she is a brown belt.

Razz and Phoebe go to the same school, so they see each other quite often. They are currently boyfriend and girlfriend. Phoebe likes to joke around with Razz, but Razz is uptight, so they tend to fight a lot. For more information, please visit an upcoming article, entitled Razz-Phoebe Relationship.

Fifi the Bear (to an extent) 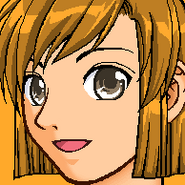 Phoebe in anime. Made at http://foxrichards.devian

Phoebe and her friends in human form. (base used)

"Alright, quick and simple." - Before Race/Battle 1

"Okay; time to get serious!" - Before Race/Battle 3

"You were good, but I was better!" - After Winning Race/Battle 2

"Oh. Well, at least I still have my health." - After Losing Race/Battle 1

Retrieved from "https://sonicfanon.fandom.com/wiki/Phoebe_the_Wallaby?oldid=1822762"
Community content is available under CC-BY-SA unless otherwise noted.