So, tell me. How does that make you feel? 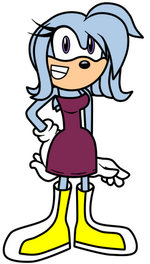 Petunia the Porcupine is an original, anthropomorphic, North American Porcupine created by Pumpituppartyzone. She is 100 cm tall and keeps her weight a secret. She owns Paparazzi Square, her best friend is Xiomara the Wolf, and her boyfriend is Moe Flippercorn.

Petunia is one of Pumpituppartyzone's first characters. Being one of his first characters, she was also one of the first not to be based off of a Toontown design. She was originally a normal, every-day sweet, nice, caring girl with telekenesis. She used to have her quills in a ponytail and also had a crush on Knuckles the Echidna. Along with this, she used to be 13 years old and would giggle a lot. She would usually hang out with Sonic the Hedgehog, Amy Rose, and Tikal the Echidna.

Petunia absolutley loves to scare people. She tries to scare people all the time, and usually succeeds when her target is Razz the Bear. She is a reporter-in-training, so she does almost anything to get a scoop. She will sometimes follow somebody around to take a picture of them doing something embarrassing, but usually is lucky enough to just show up when something happens. She usually brings either a camera or a camera crew around with her so that she will always have a scoop. Petunia also relies on looks. She would do her makeup at the oddest times and places.

Petunia does not have many very special abilities. Like most characters, she can do the Spin Jump and Spin Dash. Being a porcupine, she can also shoot quills out of her at people. She can erect her quills aswell. Most Since she is a reporter-in-training, she has a lot of spy-related abilities. She is a good cook, and her weapon of choice is a microphone.

Petunia works with Cyan the Pig as co-reporters for News Channel 4.5 in Central City. She also works with Siegfried the Wolchidna, using him as their camera man. The three almost always work as a team on projects. Whenever she needs to disguise herself, she uses the alias Petunia Cooper and uses a potion to turn herself into a human. Our of the three in her group, Petunia is payed the most and gets the most facetime.

Petunia is a member of the "Egg McMuffins", and is a balance type character.

In this game, Petunia is a non-playable character. She is the owner of Paparazzi Square, where she also hands out Power Rings.

When Cliff McMuffin set up his first baseball game with Petunia and Lily on his team, they were the only balance type characters. They got along very well, and now are good friends. 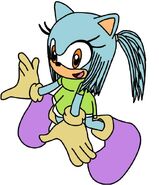 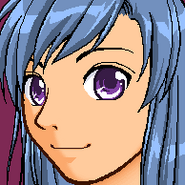 Petunia in anime. Made at http://foxrichards.deviantart.com/art/FaceMaker-52755515

Petunia taking a pic of Raz in the shower (base used) 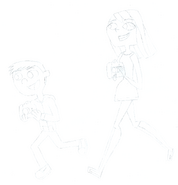 Sketches of Cyan and Petunia as humans

"Ready to embarrass yourself?" - Before Race/Battle 1

"It's not whether you win or lose. It's that I won!" - After Winning Race/Battle 2

"You're terrible." - After being 'Killed'

"Look at that! Haha!" - After hitting a homerun

Retrieved from "https://sonicfanon.fandom.com/wiki/Petunia_the_Porcupine?oldid=1408796"
Community content is available under CC-BY-SA unless otherwise noted.