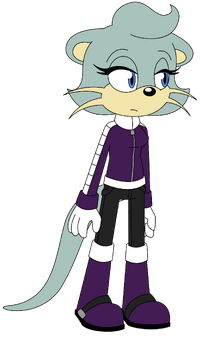 Perlita the Otter is a member of the Soumerca Egg Army, and serves under Soumerca Sub-Boss Avalaine the Eagle of the Jade Fortress Egg Base.

A lean otter who stands a fair bit over three feet tall, Perlita has a short muzzle with a round nose, two thick whiskers on either side of her cheeks, small, rounded ears that hang more at the sides of her head than on top of it, and a fairly long, thick tail that tapers to a tip.

Her fur is primarily opal in color, with a medium champagne muzzle, chest, and stomach. She has no hair on her head, instead having a large, curled tuft of fur, and her eyes are cornflower blue in color.

Her outfit consists of an American purple long-sleeve top with a thick white collar, white stripes down the sleeves, and a zipper down the front, white gloves, black pants, and American purple boots with white cuffs.

Perlita is a fairly strong fighter who excels in close-quarters combat, using her decent physical strength in tandem with her weapon of choice, an Energy Stave fitted with an Algidite core; this gives her an Ice-aligned punch with this weapon. She also carries a laser rifle with her as a backup weapon. Her Cyberized spinal column is incredibly flexible, and this gives her formidable reflexes when it comes to dodging; this also allows her to make very sharp, tight turns in the water while swimming.

Being an otter, Perlita is a powerful swimmer, and has great stamina; her thick fur helps to keep her warm even in frigid water, and her tail acts as as a rudder to propel her. Speaking of her tail, it's well-muscled enough to knock a lightweight opponent off their feet with one strong swipe, and she also has access to a powerful bite thanks to her strong jaws.

This Genetic Ability manifests in the form of an unusual muscle structure that does not lock up when hit by an Electric-aligned attack; while Perlita will still take damage from the attack, this makes her practically immune to the common secondary effect of paralysis. However, it does not protect her from any paralysis induced by severed nerves or a severed spinal cord, although the Cybernetic enhancements to her spinal column have strengthened it somewhat.

Perlita has no specific resistances to any Elements or energy-types. She is quite fast, especially in the water, and can easily outpace slower foes and evade their attacks. Her thick fur is naturally designed to repel water, and this allows her to stay warm even while swimming in frigid waters; it also seems to make her more hydrodynamic, although it doesn't reliably repel Water-aligned attacks unless they are incredibly weak. Her Algidite-Core Energy Stave also gives her an edge over opponents weak to the Element of Ice.

Perlita has no specific weaknesses to any Elements or energy-types. Her defenses aren't anything special, therefore she mostly relies on her agility to try and evade potentially devastating attacks. Her thick fur is designed to trap heat, and this can leave her prone to heat exhaustion if she isn't careful. Her Algidite-Core Energy Stave also isn't as effective against opponents who resist the Element of Ice.

Perlita is a person who marches to he beat of her own drum, and she's quite adamant that it remains that way. She hates being rushed, and may obstinately refuse to act if forced to do things outside of her own pace. She also has little tolerance for people who continue to pester and question her even after she's given them her input.

When Perlita focuses on a task, however, she diligently sticks by it until it's completed (not that she'll attempt to rush through it, however); she's also remarkably patient, and has little problem waiting for others to do the things they need to do. She generally has an easy-going attitude and is pretty accepting of things happening around her, so long as she's not harried.

Inked version of current design
Add a photo to this gallery
Retrieved from "https://sonicfanon.fandom.com/wiki/Perlita_the_Otter?oldid=1860691"
Community content is available under CC-BY-SA unless otherwise noted.