Start a Wiki
This is an article about Perish the skeleton, a character created by Megaphantaze on 09/9/2013. 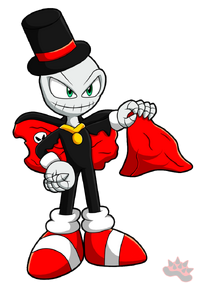 Perish the skeleton is Megaphantaze's created fan character, who appears in Hero of Mobius .

Perish is a white skeleton with his trademark top hat. He has a necklace, which bears energy, which keeps him alive. He has black overall costume with red cape and white gloves. He has also sonic's trademark shoes, which he made himself.

Perish likes to tease people and he is humorous. Although he has humour, he is really evil for everyone. He may have humour, but he is villainous. He tries to hide is villainous attitude when not on battlefield.

He doesn't show any mercy for anyone, when fighting. He uses imagination on fights to make it more interesting for himself. He may doesn't sound like evil at all, but wait until you see him at fight. He makes usually pranks and is a big bully.

Perish is a son of the Stilton the Skeleton, the master thief of his universe.Being as his student, Perish learned being a criminal as his father. He gone to criminal high school and applied to a job, which boss was Yukon, the new enemy of Sonic the hedgehog. With his help, they revived all robot masters and now Perish is helping his master to fill his evil plan to make the thing, where Eggman has failed many times: make end of the world and Sonic.

When Yukon started his plan, he made a robot factory to create an army of robots. Perish took the responsibility to guard the factory and made a fortress there. He even got some powerful guardians such has HandiPanky, a large three handed garbage collector, A toxic blob called Hazmat and Yukon's greatest Joe model, Powerhouse Joe.

Perish possesses WCS (Weapon copy system), which he uses against Sonic. his version  allows to copy any weapon or ability and  combine possessed abilities and weapons to deadly combinations.

He also has a powerful necklace on his neck, which keeps Perish alive. Without it, his soul will be free

Perish has a medal, which includes his soul. His body will stop working, if the necklace is removed. Perish has 30 seconds without necklace, before his soul gets free from body. He has a weapon to stop those, who steals his necklace. It paralyzes the thief.

Perish has done few vehicles for the bad days. He owns large Arakno Skull, which has spider's shape and can walk on walls. He even has ground vehicle called Skull Butler, which has sharp razors.

Lordi: They only come out at night

Perish leads a group called "Capsackers", which is actually a group of his relatives.

Amorphis - Perish's big brother. He has a thunder saber, which he uses to paralyze and slash opponents.

Loiri - Perish's father in law. He works on the ocean and has an anchor hand, which he uses to faint his opponents.

Jontte - Perish's brother in law. He handles arctic stuff and has freezing gun.

Failpace - Perish's nephew. He handles Parkour but does not have super powers like other relatives. Instead, he handles combat and fighting techniques very well.

Joxter: He is adopted family member from the mystic mansion. He hates everything happy.

Irina: Perish's Mother in law. She can use diamonds as her weapon. 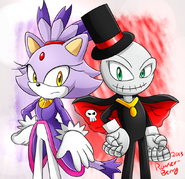 Blaze and perish by Rowser-berry on Deviantart

Perish.EXE (no relations to Sonic.EXE) line art by Hexx5 and coloring and editing by megaphantaze 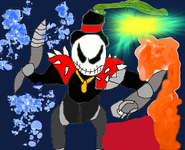 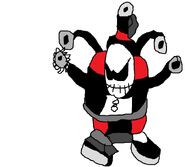 Sketch of Perish the Skeleton made by Nitrogen218
Add a photo to this gallery
Retrieved from "https://sonicfanon.fandom.com/wiki/Perish_the_Skeleton?oldid=1588049"
Community content is available under CC-BY-SA unless otherwise noted.