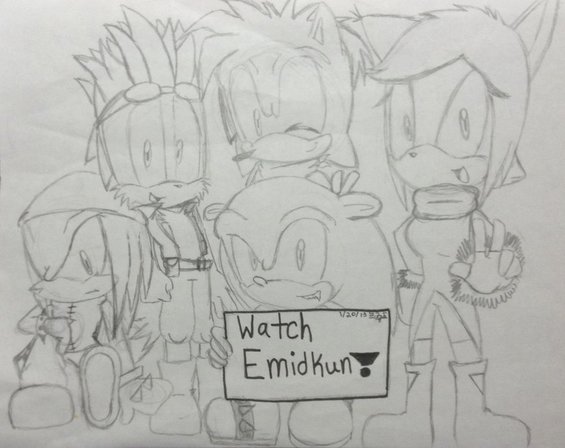 The leader of the Peace Enfocers, which he founded after Spikes disbanded Team Atom. Doing this caused him to find out he could be just as brave and independent as his former leader. A very caring and thoughtful individual, he nonetheless lacked some confidence in himself at the beginning. This confidence grew however, as a result of his various accomplishments as a Peace Enforcer. This enabled him to handle himself well in combat situations. After Spikes returned, Max returned to his former self and wanted to give the leader position to him. Spikes refused, saying that he had done a good job. Since then, he doesn't doubt of himself anymore, even bickering with Spikes sometimes on decisions to take.

The pseudo-leader of the Peace Enfocers, which he joined two years after disbanding Team Atom. During this two year absence, he trained his fighting skills. Knowing that his feet are his best weapon, he trained in taekwondo and capoeira. After returning, Max returned to his former self and wanted to give the leader position to him. Spikes refused, saying that he had done a good job. Another reason was that he also liked to be able to do what he wants.

A young echidna who was the third member of Team Atom. In the two years after the disbanding of Team Atom Keith wandered the world whilst honing his fighting skills. He eventually started to participate in underground fighting tournaments in order to gain some money, where he became the reigning champion. After seeing a live broadcast of a battle of the Peace Enforcers, Keith returned to his former teammates who in his words, "couldn't do shit" without him. He arrived on the scene just in time to seemingly "save" Spikes from an attack in the back. After this, he chose to stick around, having missed being with his adopted family.

A ninja rabbit who was shunned by his clan for the loss of the green Chaos Emerald (which they called the Midori). Lacking a purpose, he and his sister Liu were the first to respond to Thomas (Max) Pirlingham's announcement about making a difference by joining him in fighting against evil. He got an obsession of being their best asset. This addiction soon became arrogance of him being the best warrior they could ever have. When Spikes the Hedgehog reappeared, he saw this position compromised. He tended to be aggressive towards him, until Spikes brought his humility back, making them friendly rivals.

A ninja rabbit and the little sister of Lance, who was shunned by his clan for the loss of the green Chaos Emerald (which they called the Midori). Lacking a purpose, she and her brother were the first to respond to Thomas (Max) Pirlingham's announcement about making a difference by joining him in fighting against evil. She has idoled Max since then and is desperate to be of use to him.

Kojack comes from a gorilla tribe living in the rainforest. He is the son of the tribe chief. Their tribe has been guarding the orange emerald, which they call the (Orange) Gem, for generations. After his tribe was invaded by Dr. Eggman Nega, they were defeated and captured. However, Kojack managed to escape. After some months, he came to know the existence of the Peace Enforcers; a group of people fighting evil and mostly Nega, created by Thomas Pirlingham (better known as Max the Fox). Knowing he could not do too much alone, he asked membership. He has since become a valuable asset to the group.

Kyxen is the older sister of the triplet superheroes L3, a fashionista from the future obsessed with current trends and hot guys. She joined the Peace Enforcers not only because Max' speech touched her, but because she thought it could make her famous and able to finally step out of the shadow of her younger siblings. She has an intense attraction to Lance the Rabbit.

The Lynx triplets, better known as L3, are a superhero team consisting of the siblings Eleim, Fijo and Nathris the Lynxes. These lived a somewhat normal life with their older sister Kyxen until a meteorite gave them powers. Following this, the three of them quickly became their town's superheroes, protecting it against crimes and supervillains. They didn't officially join, mainly because they already have a duty in conserving the peace in their hometown. Regardless of this, they can often be found helping their sister on missions or annoying her, or hanging around Keith.

Leo is the most recent addition to the Peace Enforcers. Residing in the Timeless Zone until Spikes dragged her out, she has to adjust to a lot of things.

After Team Atom returned to the future from their intended murder of Sonic in the past, Spikes the Hedgehog, feeling they lost their purpose, disbanded the team. Two years passed and during this time Eggman Nega revealed himself. Feeling the world needed an organisation of heroes, Max founded the Peace Enforcers, by sending an announcement about making a difference by joining him in fighting against evil. The first to respond to the call were Lance the Rabbit and his sister Liu, followed by Kojack the Gorilla. These three had a common ennemy in Eggman Nega and were more than happy to be able to help stopping him. Every plan of Nega was stopped by them. After gaining some notoriety, they gained an additional member in Kyxen the Lynx, with occasional help from her siblings L3. On a attack in a big city, Spikes reappeared and saved the day. After robot-cleaning the town, Spikes was attacked in his back, only to be "saved" by Keith. Spikes commented that he was slow, with Keith replying that he doesn't have superspeed. This was the rebirth of Team Atom, Max' former team.

Max wanted to give the leading position of the Peace Enforcers to Spikes, but he refused, saying that he had done a good job without him these two years and that it didn't have to change.

1 of 6
Add photo
Retrieved from "https://sonicfanon.fandom.com/wiki/Peace_Enforcers?oldid=1835426"
Community content is available under CC-BY-SA unless otherwise noted.