Pawn S is the only robot from the Pawn Special Model line of robots, which were heavily Egg Pawns that were made to wipe out everything. However, after it went haywire, it no longer wants to harm, but protect 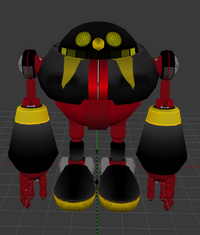 Pawn S has a similar physical apearance compared to an Egg Pawn, with having only having two major differences. One is the new color scheme. Instead of the normal orange, blue and grey, Pawn S sports mainly black and red with some yellow in places like the eyes. The other difference is it's size. Pawn S is massive compared to a normal Egg Pawn as the Pawn S stands at 7'9". There are some minor differences like two stripes coming from its neck.

The Pawn S models were an advanced model of Egg Pawns originally created by Dr. Eggman. He wanted to have something as mass-producable as an Egg Pawn with the power equal to something like Metal Sonic. After ages of time and testing, he finally created it. The Pawn Special Models were now almost complete. The ultimate war machine soldiers were created and it was ready for final testing before beginning mass-production. However, a horrible event occured that destroyed the whole project. While testing, the scanners telling the Pawn S to attack went haywire, causing it to destroy everything in sight. And with the immense strength it was given, it did so easily. Dr. Eggman tried to stop it, but gave up after trying to diable it didn't work. He then just ran and tried to salvage anything he could from his lab as it was collapsing. Pawn S was halted from the rampage as a metal pole fell from the ceiling and hit it on the head. Normally, it wouldn't even notice a pole fell on itself as it has a large amount of endurance, but it hit Pawn S at a specific angle on the head to disable the sensors and shut it down. When Pawn S awoke in the ruins of the lab, it stared confused at trying to remember what had happened. The personality of the machine had changed from being emotionless and only caring for the death of all to being very peaceful. As it walked around, trying to find any clues of what might had happened or even what it is. It soon found one salvagable piece of clues. A blueprint of the Pawn Special models, but with several rips here and there. One rip was at the name located at the top. Intstead of saying "Pawn Special Model", it only said "Pawn S" As it identified the model as what Pawn S was, it believed it's name was simply Pawn S. After learning this and seeing everything it would see as salvigable in the collapsed lab, it walked off into the forest to venture.

Pawn S is very gentle, as it tries all it can to not harm despite being a war machine. And when it does harm something or someone, it usually tries to fix it or make up for it by helping the person. Pawn S can sometimes get things way over its head trying to be nice and get into serious danger. And just like how it snapped from wanting destruction to wanting peace, Pawn S could snap back to evil

Pawn S has the power to have its hands go in its arms and switch them out for one of 2 weapons to take out enemies. They are either a chaingun or a flamethrower. Also, it can switch its vision to night or heat vision. This allows Pawn S to see targets very easily in most situations to quickly extirminate them. One 'ability' is that it was built to be very powerful and excell in hand-to-hand combat. This also helps with the entire "kill everything" motif he was built around.

Ground Shattering Stomp- Pawn S slams his foot on the ground, destroying the ground in a 5 yard radius and shake the ground vigorously around a 10 yard radius

Fire Shield- Pawn S turns both of his hands into flamethrowers and extends them outward. Then it turns the top part of its body around extremly fast, creating a flaming barrier

Posing For Protection- Pawn S will quickly scan a person it would want to protect. It will then move in front of the person and morph into the pose the person is currently doing. Pawn S does this to block an inccoming attack for someone near them.

One of Pawn S's biggest weakness is being somewhat slow. As it was built with power in mind, it suffered the downside of turning somewhat slow. This allows it to be outmaneuvered by fast foes in combat. The other main weakness it suffers if being too nice. Unless Pawn S sees that it would be absoulutly necessary to fight, it refuses. That is, unless it has gone on a rampage.

Retrieved from "https://sonicfanon.fandom.com/wiki/Pawn_S?oldid=1826336"
Community content is available under CC-BY-SA unless otherwise noted.