Patricia the Skunk is a lawfully good witch skunk girl. She is a happy, kind, caring skunk who has a heart of Gold that helps the heroes with her magic powers.

She is the main female character of Spongebob100. 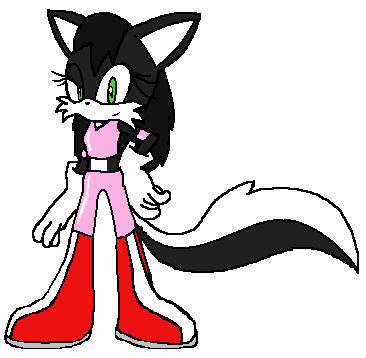 She appears to be a cute twenty-one year old anthro Mobian skunk. She has green eyes, long black hair, black fur with white chest fur and a white vertical stripe on her back tail, a white muzzle, three long eye lashes, a black skunk tail with a white vertical tail stripe, black arms and black legs.

However in her new current clothing redesign by September 2019 & onwards, her clothes remain the same, but her clothes change colour is now a more purple colour, with red rose gloves & boots.

Patricia the Skunk is a very kind, sweet and caring girl who is friendly, lively, energenic, polite, cheerful, joyful, and playful. She has a 'heart of gold', and she really cares about taking care of the heroes, wild animals and children, since she truly care for their well being.

She is sometimes sassy, cheeky and flirty (in Rouge's case), but she's mostly a generous, trusting, caring and honest girl who always puts others before herself. She is also brave and outgoing like Sonic.

Like Sonic and Jack, she loves excitement and adventures with her friends to stop Dr. Eggman and Dr. EggPlankton.

﻿She is one of the sisters who is apart of the Witch Sisters, along with Selina, Abby, Laura, Jasmine, Michelle, Zoey, Bessy, Molly, Marsha, Victoria, Nina, Anna and Penelope.

When she was 18, she was being attacked by three Crocodile Bandits, but had later been saved by Jack the Hedgehog (Spongebob100). Eventually, the two would become best friends.

She soon became the new leader of the Witch Sisters after her first victory against her villain / arch enemy, Layla the FoxSkunk, saving her new friends in danger. And after that, she learned to use her Magic to help other People if they were in trouble and vows to help any hero in need, no matter how big and dangerous their problems are.

She was married to Anu the Anubis Warrior one day, and they have  daughters named Patty and Keren.

Patricia can spray her skunk scent at any unlucky villain who stands in her way. Patricia can also use Iron Tail on any enemies to deal heavy damage by coating her skunk tail with energy and whacks at any enemy. Just like a Kitsune, (a.k.a. the nine tailed fox) she can make 8 more skunk tails appear behind her, making it 9 skunk tails. She can use her nine tails to fly, just like Tails.

She is very flexible capable of bending & dodging the bullets with her Flexibility & can do acrobatics very easily. She learns how to fly on her flying broom very easily most of the times & she also has Speical Fighting Skills to protect herself from Enemies & Bullies.

She doesn't tolerate dark powers, as she is a light-user. She is very vunerable against dark powers; they weaken her immensely.

Add your character here if your friends with Patricia the Skunk

Add your character here if your Patricia's Rival

Add your character here if your Patricia's Enemy

Retrieved from "https://sonicfanon.fandom.com/wiki/Patricia_the_Skunk?oldid=1860629"
Community content is available under CC-BY-SA unless otherwise noted.