Darkest Shadow, the author of Patrice the Bunny, considers this page to be unfinished. As such, some sections may change. 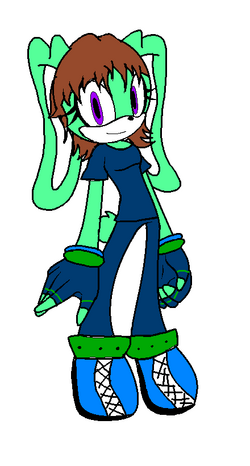 Patrice the Bunny is a fan character adopted by Darkest Shadow. She is a female skater from Beach Cove City. She is a good friend of David's, and also a dancer on Alyssa's dance team. She was formerly a part of the MYSDC, the Mariala Youth Star Dance Company, but she quit once she started high school to persue skateboarding.

Patrice was born on February 9th in Eyeperch Town. Her mother and father thought of her as a happy young child, who dreamed big. Not much is known about her early years. The only known detail was that she lived in Paliside Town from birth, to this present day.

A year later, she discovered her self-taught talent in dancing. Her mother signed her up to take dance lessons, and she was sucessful in doing so. She absolutely loves dancing and always tries her best to perform stunts.

At the age of 9, Patrice sometimes got made fun of for having some boy-like traits and was often called a 'boy with long hair'. She didn't realize it, as some guys actually found her to be cool, most of them are popular. She started to hang out with them and invite her on what was supposed to be a 'guys-night-out', but which was made into a 'guys-night-away-from-girly-girls'.

At the age of 12, Patrice met pro skateboarder David Sabato, and his gang. She became a part of it and started to skateboard with them. Also, she met Alyssa, Wynter and the rest of the Mariala City dance team and danced for them.

Patrice appears to be a tomboy. This is shown by her love of skateboarding. She actually seems to get along better with boys than girls, and seems to do a lot of boyish things. She isn't really much of a mall person either, and doesn't care how she looks, she is sometimes made fun of for this.

Patrice is bubbly, outgoing and exciting. Most adults view her as immature as well, but she is bold and lively. When she talks, she means what she says and always looks at something more fun. However, she hates boring things because of this.

Despite her tomboyish personality, Patrice sometimes shows her inner-girly girl. This is shown by her love of dancing and going to the mall.

Patrice is a good skateboarder. She has been practicing for a while, and became really good at it over the years. She started to hang out with the main skateboarding guys and gals. Her favorite trick is a half-cab impossible and her best trick is a double kickflip-heelflip.

Patrice also happens to be a good dancer. She has been dancing for a very long time and was good enough to get on the same team Alyssa was on. Her favorite ballet command is twirling while her best trick is a split leap illusion one handed cartwheel.