AirPlay has been moved here.

The Parkview-Emerald Coast Regional Airport (MAA ID: GPKV - MWAA ID: GPRK), commonly called PECRA and Parkview Airport by locals is the only commercial airport in the Emerald Coast region. It is the second busiest in the Federal Republic of Emeraldsbourg, behind the Mobius Corners Metropolitan Airport. An expansion in 2010 widened the airport from 1 to 3 terminals, and added 3 concourses: A, B and C.

In January 1959, the Parkview Airport was constructed and opened to the public. It was the first commercial airport on the Emerald Coast, and had flights that served areas as far east as West Allis. By the 1970s, passengers had increased to coincide with the rapid growth of the Parkview region. City Council representatives decided that the airport was growing too big to handle, so they created a new commission to oversee the airport (the Hunter County Aviation Authority). The HCAA knew that the population of the Emerald Coast was rising, and so was demand. The airport was renamed in 1973 to Parkview-Emerald Coast Airport, to reflect the airport's demad has grown to the entire Emerald Coast, not just Parkview. By 1975, however, leaders knew a makeover would be needed.

In 1975, the HCAA awarded a new reconstruction design contract to Benjamin Rielke, a Klestovian architect. As the Emerald Coast was growing, he had to make sure to redesign the airport to fit the needs of all of the residents. In December 1975, construction began on a new $100 million reconstruction of the airport. 19 gates were added, technology was upgraded, and the terminal was redesigned. By 1978, the new airport, along with a new runway, was complete. However, due to growing concerns about the population once again, theopening was rescheduled for May 1979 in order to add larger waiting rooms and add 2 more gates. The Parkview-Emerald Coast Regional Airport was finally reopened on May 20, 1979.

The population continued to grow, but the airport was able to satisfy the population's demand until 2010. During a Metropolitan Council meeting in December 2008, the delegates identified that the Emerald Coast's population was to reach 9 million by 2030 if the population continues to grow at the current pace. Because of this, PECRA would be in need of another design soon. Thus, the HCAA once again approved the reconstruction of the airport, and construction began in February 2009, after numerous delays because of Shahooter's Rebellion.

Bad weather and tax increases did hamper the construction efforts early in the work period, but with advanced technology, the new airport was finished in early 2010, with a scheduled opening in May. Sadly, the commissioners were on vacation, so the opening was moved to June 2, 2010.

Today, PECRA serves 4 million passengers annually, and the number is expected to grow. The airport has 53 gates, advanced technology, a subway connection and a people mover. 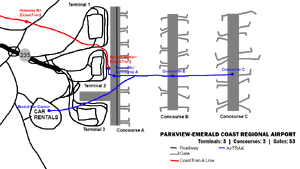 Following the airport's expansion, the airport now has 3 terminals and 3 concourses. The new concourses have a combined total of 53 gates, and many of the check-in desks, the baggage claims and duty-free shops are in the three terminals, with some shops located in the concourses. Unlike most airports, there is a trading post located in Terminal 3. The three terminals, along with Concourse A, are part of a larger building.

Security checkpoints are tight and are located in ALL terminals. Concourses B and C are arranged successively in distance from each other. The concourses are accessed via AirTRAK or movable walkways underneath the taxiways.

Parkview AirTRAK is the people mover system. The system has 4 stations and one that it shares with CoastTran. The system uses tram-like light rail vehicles to help get passengers around the airport. Every train has artwork selected from local students.

The airport has a series of movable walkways and signs that guide passengers to where they're going. In addition, the new airport also has an underground people mover named the Parkview AirTRAK. The people mover begins at the CoastTran Airport Station and has 1 stop in each of the concourses, and 1 stop at the new Rental Car Center, southwest of the airport. Shuttles are also provided to get between hotels and the terminals.

Every passenger is provided a free airport map to help them navigate the airport.

There are many ways to leave/enter the airport.

A popular way to leave/enter the airport is by using CoastTran, which is the Emerald Coast's subway/commuter rail service. There is a station directly in front of Terminal 2.

Emerald Coast Regional Transit offers an Airport Shuttle from the Route 35 Park and Ride to the airport. The shuttle serves the hotels, terminals and rental car center. ECRT also picks up disabled passengers at Terminal 2, right below the CoastTran station.

During the expansion of the airport in 2010, a new freeway was constructed to replace the old roadway system at the airport. The Airport Freeway serves all three terminals and connects you to Route 35 to get where you are going. There are exits that serve Holleway Rd, Terminal 1 and Terminal 2. The freeway ends at Terminal 3.

The PECRA Rental Car Center is located southwest of the airport, and is home to 6 major rental car and limousine operators. Passengers can access it from the AirTRAK, or can drive to it via Car Rental Ave.

Retrieved from "https://sonicfanon.fandom.com/wiki/Parkview-Emerald_Coast_Regional_Airport?oldid=1852730"
Community content is available under CC-BY-SA unless otherwise noted.