Start a Wiki
This is an article about Pandora the Caracal Hybrid, a character created by SPop120 on 05/16/2013. 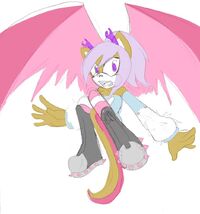 Pandora has lavender hair strung up in a ponytail, seperating into three strands. She has purple horns, and a light blue sweatshirt, with the sleeves turning to white along with the rest of the sweatshirt. She wears pink leggings, and wears black boots with a steel toe and pink spikes around them. She has dark pink wings along with a light pink inside. She has violet eyes, and she has a long, tan tail with a pink stripe on it.

Pandora is rather shy, but more outgoing than her sisters, but not quite as outgoing as Andromeda. She is polite, but she is rather quiet, mostly speaking when spoken to. She is very brave, and will do anything to protect her friends and family. She will not do things when forced to, and she never takes flirting well. Pandora is somehwat dim-witted, and it takes her slower to figure out things.  Pandora also enjoys fighting, as it makes her forget about her parents that left them behind. Pandora also can hold  a grudge for a very long time, and she won't forgive them for a very long time.

Pandora's family abandoned her and her siblings when they were young, left to be raised by their aunt, and along with their cousins, Tesla and Wilson. She and her twin, Andromeda, grew more close throughout the years, but they soon drifted apart. They never saw their parents again, and they all often fought with Tesla and Wilson.

Later on, Pandora and her siblings were told that their parents had abandoned them because they were running from Macabee the Echidna. He was going to hunt them down and kill them, and that's why they abandoned them. Pandora was still resentful towards them, and didn't have the strength to forgive them, but she has since moved on, but she still remains resentful.

Replace this text with some info about the character's powers, if they have any. If they have a lot, you can list them, but if you just do a list, make sure that the list items link to pages about the powers!

Retrieved from "https://sonicfanon.fandom.com/wiki/Pandora_the_Caracal_Hybrid?oldid=1630273"
Community content is available under CC-BY-SA unless otherwise noted.