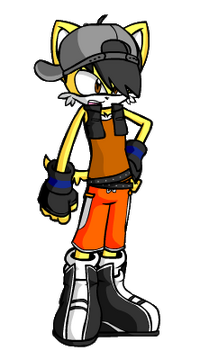 Otis is a light yellow colored corgi with white fur on his chest, muzzle, and the insides of his ears. He has coffee colored eyes. His attire usually consists of a dark orange tank top under a sleeveless black jacket, a black silver-studded belt holding up his orange and white pants, white socks, and black and white shoes. He also wears black fingerless gloves with detached black wristbands that have a blue stripe and a gray snapback hat, which he wears backwards.

Brash but bold, Otis will stop at nothing to protect the ones he loves. He has an inferiority complex and hates to be challenged. Though he looks and sounds stern, he would do anything for his friends, and is considered a listening ear in a time of crisis.

Otis had a relatively easy life as a child. He never tried to get himself in trouble and tried to make the world better. At the age of 18, he left his parents and moved to an apartment far from their old one in Station Square. He met his wife, Lila, at the age of 21 and fell in love. They were married and had a daughter, Jem.

In time, their peaceful life was shattered when Eggman came to Station Square. Otis, for his leadership tactics, was chosen to lead a special ops team. Lila is also on the team, although she usually stays behind to take care of Jem and keep communications open.

Otis seems to have an inferiority complex. He hates anyone challenging his authority and will start to rant and rave. He eventually calms down, but not before getting a few kicks in.

He has a mild fear of spiders. If one comes close to him, he will remove himself from it or ask a fellow operator to kill it for him. They absolutely give him nightmares.

Otis' name is based off a character from the Andy Griffith Show, also named Otis.

Otis has no known allergies.

Retrieved from "https://sonicfanon.fandom.com/wiki/Otis_the_Corgi?oldid=1853375"
Community content is available under CC-BY-SA unless otherwise noted.