I NEED my coffee so I can be hyper. Without it, I'm a total bore. 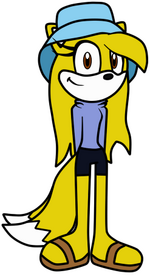 Osaka the Fox Hybrid is a Vegas Clone adopted by Pumpituppartyzone. She was one of the later clones to be adopted, probably the third or second-to-last. Her height and weight are currently unknown.

Osaka is usually a very bubbly person. However, she claims this is only because of the coffee she has in the morning. She says that if she doesn't have her coffee, she is very boring and cranky. She definitley is not the smartest of the Vegas clones, but does tend to point out loopholes that the others don't catch. She tends to get very close to breaking the fourth wall, but usually doesn't end up doing so.

Not many of Osaka's abilities are known mostly because she rarely uses any. It is known that she can fly with her two tails, but that is about all that is known. She does know how to ride extreme gear, but currently hasn't found a personal one. The last time she tried to find one, she slipped off of the gear and got her head stuck in the ceiling. When she got out, she took a head-first dive the the marble floor and made a very large dent in it. The people with her let her fall asleep, and she fell into a coma. Currently, she is 100% back to normal.

[only for characters she isn't related to or cloned from]

Osaka's design in the Female Furry Dollmaker
Add a photo to this gallery
Retrieved from "https://sonicfanon.fandom.com/wiki/Osaka_the_Fox_Hybrid?oldid=1409047"
Community content is available under CC-BY-SA unless otherwise noted.