It's a rough job and reaching the top. but all it takes is a calm mind to make things easier!

Rheda Alexandria is an anthropomorphic deer created by Mr.gameandfight on July 5th 2017. She is a recurring character in the series Valiant Hunters who is currently employed at Cavalry Corporation under the alias "Oestra" (Pronounced: Estrah) who is known as one of the highest ranking vigilantes of the entire network.

Oestra is a slim, tall and bright hippocamelus deer with straight white hair, short antlers slightly tanned skin and bright purple eyes. People of Authenia and even other planets consider Oestra to be extremely beautiful. Her casual attire displays as leotard with long heels and fingerless gloves which are all with yellow and white highlights. Outside of work, Oestra has a wide fashion sense and constantly changes her and hairstyle going out casually to swimming, to camping and even changes her pajamas frequently.

Aside from her fashion sense, Oestra has a tattoo on her forearm that reads "Knowledge is power, Ignorance is bliss" and wears a choker with a purple pendant that she always wears. 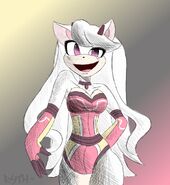 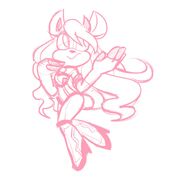 Being one of the few people of cavalry corp. to reach the highest tier and reviews of the entire company, Oestra is very noble, brave, selfless and righteous. She is willing to battle anyone regardless of power and reputation. This leads to another one of her defining traits which is her great fighting spirit that will lead her to be unhesitant to battle and confident in her abilities.

In the times that she has to herself, Oestra is an extremely outgoing person often getting into activities outside such as biking through the city, working out at the gym, flying around and doing yoga. But the one activity that trumps all the other things is shopping as she has a very huge fashion sense.

Oestra is also committed to all of her family friends and fans to where she is often spotted socializing with many of them. She is jubilant, respectful and helpful to the entire community even to the ones that do not like her.

Oestra's main power is the generation of light. Unlike Rik and Karin who are capable of expanding the use of their elemental abilities, Oestra can only emit small bursts of light from her hands, feet and hair. She makes up for this by using the said powers to enhance her striking capabilities or create temporary halos of light that are casted around her. She can also be able to shield herself around her light by either holding her hands out to deflect a projectile or shroud herself temporarily to avoid oncoming damage. At times she has made situational uses of her abilities such as lighting a darkened room or blinding an opponent.

In Respective Orders, Oestra has 2 theme songs. The first is Outlaw by It's Different and the second being Make Way by Aloe Blacc

Retrieved from "https://sonicfanon.fandom.com/wiki/Oestra_the_Deer?oldid=1860473"
Community content is available under CC-BY-SA unless otherwise noted.