Julia Finitevus, the owner of Octavia-Ca Dax the Echidna (Dark Mobius), is currently rebooting this page. As such, some sections may change drastically.

Simpletons!!! Do you really think that YOU can rule over Mobius?! Inferior creatures!!

Octavia-Ca Dax is a self-genetically altered female Echidna born in the future of Dark Mobius and the daughter of Jani-Ca.

Octavia-Ca, due to her genetic enhancements, believes that she is superior to all other Mobians, especially towards those who are not genetically altered like her. This trait makes her especially egomaniacal and she does not care if anyone gets hurt or killed in her conquests, even her fellow genetically altered Mobians. She also loathes those who have failed her and will willingly execute them as punishment. She expresses her loathing of "lower organic lifeforms" to the fullest, much to her mother Jani-Ca's worry. Octavia-Ca also is very greedy in the sense of obtaining great power and so she will go to the most horrifying lengths just to achieve it.

Octavia-Ca has basically the same abilities as Chloe-Su, but instead of manipulating regular Chaos Energy, she manipulates the corrupted version, and at a much higher scale than Chloe-Su. Another difference is that she can somewhat manipulate dark matter, but on a very small scale. Octavia-Ca also uses her Warp Rings in a manner very similar to that of Dr. Finitevus. Octavia-Ca also has a lot of experience with technology and can create almost any machine that she needs to get the job done. She also has baffling coding skills, to a degree that hasn't been reached by any Mobian in centuries. Octavia-Ca also has experience in genetic alteration, which is proven by the fact that she self-genetically enhanced herself.

Octavia-Ca's inability to understand why people do what they do can pose an issue when someone tries to get in the way of her goals. Another weakness is the fact that because she manipulates Chaos Energy more than Chloe-Su does, Octavia-Ca has less ability in hand to hand combat and using melee or projectile weapons. She also can become tired if she uses her Chaos Powers or dark matter powers for too long.

(Going under a MAJOR reboot!)

("Westwood Prep for Snobs and Rich Kids" canonicity is uncertain at this time.)

Octavia-Ca is a purple female Echidna with violet eyes and purple bangs with yellow streaks in them. She typically wears a silvery grey shirt with a blue and yellow collar on it, which is covered by a dark grey leather jacket. Octavia-Ca also wears a white two fingered glove on her left hand with a teal bracer that has blue spikes on it and has her right hand wrapped in gauze. Her right arm is adorned with several Warp Rings, similar to Dr. Finitevus. Unlike her Light Mobius counterpart, Chloe-Su, she doesn't wear glasses and instead wears contacts. Octavia-Ca also wears dark grey pants and black knee high boots.

Get out of my way! - Octavia-Ca fighting against Silver the Hedgehog

You cannot stop me... I will not quit until I do what my idiot father never could... - Octavia-Ca fighting against Sonic and the rest of the Freedom Fighters

I will kill you all if I must. - Octavia-Ca fighting against Team Dark

Hahahaha! Fools! You cannot stop the revival of Dark Gaia himself! - Octavia-Ca attempting to unleash Dark Gaia upon Mobius

Pathetic... you think your manipulation of Chaos Energy is supposed to intimidate me? - Octavia-Ca vs Super Shadow

Of all the people I have met... you must be the most incompetent! - Octavia-Ca vs Rouge

Grrrf! No! I will not be defeated! - Octavia-Ca, angry that her plan failed

You're a failure to your people! - Octavia-Ca fighting Dr. Finitevus

This version of Octavia-Ca was drawn on paper, which I actually prefer over pictures drawn on a device... 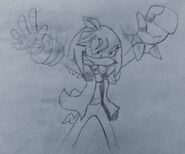 Octavia-Ca preparing to attack Sonic... artwork is mine, of course.

Octavia-Ca trying to convince Shadow the Hedgehog to join her in her quest of purging the multiverse...

Octavia-Ca faking being subdued by Silver...

Octavia-Ca Dax commanding the Chaotic Dark Legion...
Add a photo to this gallery
Retrieved from "https://sonicfanon.fandom.com/wiki/Octavia-Ca_Dax_the_Echidna_(Dark_Mobius)?oldid=1853264"
Community content is available under CC-BY-SA unless otherwise noted.