Oblivion is Jonic's dark counterpart and as such is an automatic villain, there is nothing Oblivion enjoys as such as his key emotions are anger hatred and rage, Oblivion also hates a great number of things be it anything the signifys justice or another villain who has prooved stronger then he is.

The main goal of Oblivion is to destroy the world somthing that would appear impossible but as Oblivion doesnt really think his plans through.

Oblivion is very agressive violent and bloodthirsty when it comes to interraction and will very often try and eliminate those around him and has as such killed many innocents without any remorse or guilt one prime example being Yuri Violet (Jonic's first girlfriend), but in most cases he keeps to himself alone, as for humor Oblivion has never once laughed or felt joy in his life as he doesnt really care for that sort of thing.

Oblivion now gained red crimson markings in contrast to Jonic's but in a different pattern. in his hair he gained 2 silver strands simmilar to Jonic's whilst gaining a ponytail on the back of his head. he also wears 2 brown belts around his chest and waist ontop of the red shirt he still wears, on his lower body he now wears silver trousers and black boots with red patterns on them. Oblivion also now sports a thick black cloak that hides the lower part of his muzzle and trails down to the back of his feet.

Oblivion wasnt technically born but made from the dark energy that hid in Jonic's body untill GX tore him out of Jonic with a strange attack (see shade origins part four) .

As a child Oblivion was lonely and unsure about his goals, but harsh and abusive training by Gx and his allies

soon turned Oblivion into a destructive and hate filled warlord who wanted to terminate everything and everyone out of anger and hatred towards his former mentor, friends and to a full extent Jonic.

At the age of 16 Oblivion obtained his markings and powers as soon as Jonic drew the Sword Of Shiranui for the first time and discoverd he could create beings from the shadows and create an army of minions to help him terminate the planet but was once again defeated by Jonic.

Oblivion was spared by his light counterpart as both are spiritually linked so if one were to die the other would perish, despite being given the chance to still live Oblivion still pledged hatred to Jonic and hid away in an abandoned fortress in the wastelands south of Vita Nova where he and his dark minions reside plotting.

Like Jonic Oblivion can use the powers he can but with a few unique skills.

Being able to use a darker version of the ookami sphere Oblivion can easily counter Jonic however he has the same disadvantages to it,

Oblivion on the other hand is unable to use beast evolution as he does not have a beast form but on the upside he has the power to levitate and reveal 2 demonic wings under his cape giving him the power of flight.

Trance is also available to Oblivion but it makes him more ferocious and destructive as he loses the ability to think when in this mode, he also has not been known to use any powers or if he even can use his powers in

For weakness's Oblivion is very weak to Light elements being a natural dark counterpart. As Oblivion can fly he is also weak to lightning as it can peirce his wings and send him crashing back down to the ground.

One of the key problems with Oblivion is that he never thinks ahead and just charges into battle hoping to just destroy somthing, doubled with his short temper and aggression Oblivion tends to lose battles with Jonic often,

Oblivion doesnt have anyone he could call a friend since he tends to see friendship as for the weak,

any other friends can be listed here

Jonic and Oblivion are natural enemys made from the light and darkness from the same form. The relation goes back to Jonics childhood from where the demon wolf was removed from his body.

Oblivion shows pure hostility and hatred to Jonic much like he does everything else and will always clash with him on every meeting, but cannot kill him and vice versa as they are both of the same being if one were to die the other would go with him.

Both wolves know this so they always spare eachother much to Oblivions anger who would rather destroy him along with the rest of the world with his dark power.

Other foes and enemys

List here if your characters a foe of Oblivion 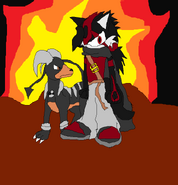 i will not bow - breaking benjimin

Retrieved from "https://sonicfanon.fandom.com/wiki/Oblivion_Yamikaze_the_Ookami?oldid=1293429"
Community content is available under CC-BY-SA unless otherwise noted.