Wow,*sniffles and starts to cry* That really hurts, I hope that was worth it.

— Nudge falling into dispair and becoming a witch

Charmayne resembles a cartoonish rabbit with a round, cream-colored head with clown make up, and a white "X" across her face, a long bronze colored "body" decorated with different colored symbols extending and retracting from a gray and black top hat. She has two stuby, cream-colored arms and wears a black bowtie. She hovers around her stage throwing coins and cards from wich her familiars spawn.

Charmayne's barrier consists of spiraling corridors lined with walls that appear to be made of playing cards, and floors similar to distorted mirrors. Some of the walls even have patterns that create optical illusions. At the end of the corridors is a circular stage surrounded by floating pianos, playing cards, and several giant top hats suspended in the air from which her familiars emerge to attack.

The magician witch with an attention seeking nature. She glories herself as the greatest magician of all, and welcomes all to come see her performance, but she only performs the same tricks over and over again, desperate for attention. Her minions will lash out at anyone who disturbs her performances. 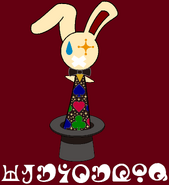 Runes (CHARMAYNE)
Add a photo to this gallery

Retrieved from "https://sonicfanon.fandom.com/wiki/Nudge_the_Lopunny/Charmayne?oldid=1681925"
Community content is available under CC-BY-SA unless otherwise noted.