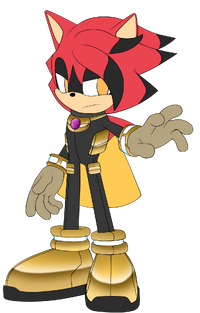 Nostradamus of Invidia is a red tenrec and an Invidian politician who is running for President of the Invidian Republic. Nostradamus is psychologically insane, primarily due to inhaling a lethal amount of Saturnium-- a gem he used to propose to who was his wife, Sofia. The gem would also grant him supernatural powers that would bend the fabric of reality, such as dimensional teleportation and using his own shadows to create copies of himself to confuse his opponents.

Nostradamus views the world as a corrupted society filled with war, rage, corruption and discord. He believes that he is the only person in the world that is able to solve all of these problems; by taking away everybody's freedom and ruling the world under his own rules.

Nostradamus is hellbent on getting what he wants. People believed he was narcissistic because he saw himself as a powerful ruler with the potential to control the world with an iron fist. Though on the inside, he's actually afraid. He was afraid of people for his entire life, and denies it constantly when somebody finds out.

8,000 years ago, a meteor crashed into the Earth. It wasn't just a normal meteor though, no. This meteor was filled with a rare mineral called Trinocticite, a jewel that's purple in color and has a mysterious glow. Ancient religions believed that gods trapped ghosts inside of these jewels, giving them supernatural powers.

Present day, an Invidian senator named Nostradamus discovered the meteor's crash site, and was curious enough to grab some pieces of Trinocticite, hoping to use it as a ring for his future wife. While trying to figure out what they were, Nostradamus accidentally inhaled some of the toxic dust that was lying on the Trinocticite. This causes Nostradamus's attitude to gradually change and turned him from nice and charming to rude and unpredictable. This drove his fiance away from him. About 2 years later, he quits being a senator to run for president of Invidia, because he believed he could make the country far better than it was at the time; but there was no need since the country was in a long period of peace and prosperity.

After losing the presidential race, Nostradamus's decent into madness was quickly becoming realized. He kidnaps Tesla's father, Arnold, who is a famous inventor and engineer. Nostradamus continued to stealing one of Arnold's blueprints, which was the Terasuit, a full-body suit capable of giving the user more flexibility and agility. Nostradamus then uses the Trinocticite he found to power up his Terasuit, and then uses it destroy Invidia and create his own empire over it. Nostradamus has now sought for world domination, which was when Tesla realizes that his father was missing.

Nostradamus has the supernatural ability of warping reality itself. Based on the level system established on the Superpower Wiki, Nostradamus is an advanced user. He is able to manipulate the laws of physics himself, allowing him destroy objects beyond his mass, making his arms extremely elastic, and simply break the laws of physics.

Nostradamus can use this to give himself infinite values of mass, especially when wanting to create shockwaves. Nostradamus would jump upwards then immediately increase his own mass by saying "Crush!". Once he falls, the ground can crack and create earthquake-like shockwaves to throw off his enemies and destroy unstable buildings.

Nostradamus can create a forcefield with his gloves by saying "Vector reversal!". Anything that touches this field will completely reverse their vectors so they would be going the other way back towards the way it came. For example, if a rock was falling diagonally, it would end up rising diagonally back to where it came from.

Nostradamus can create 7 copies of himself. None of these copies can attack, and are extremely weak, so they could only be used to distract the victim as he prepares a powerful attack.

Thanks to his gloves, Nostradamus is granted immortality. As long as he wears the Trinoctocite-powered Terasuit, he can no longer age. He can, however, still suffer from physical blows, but his immortality allows him to heal faster than normally.

Retrieved from "https://sonicfanon.fandom.com/wiki/Nostradamus_The_Tenrec?oldid=1780447"
Community content is available under CC-BY-SA unless otherwise noted.