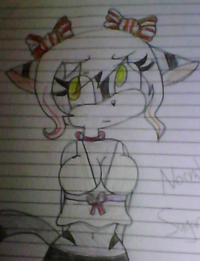 Hair: White with streaks of red and orange.

Normla The Sugar Glider is an FC made by Chrismh. She is bold and courageous, but follows a creepy interest in things like performing surgery and weapons. Nice and sweet, but with a cynical side hidden deep down that can only be triggered through some "not recommended" proceedures.

Normla is an eighteen year old girl who grew up in a very windy climate just outside of Station Square, somewhere possibly near Mystic Ruins. She is a little tall for her age, due to not having her thick flabs of fur connecting her arms and legs, allowing her to stretch a little bit more naturally. She is a neutral-side character.

Currently, Normla lives in a small home next to a big windmill she loves to go inside of and climb to the very top in order to see the sights and enjoy the lovely breeze...

She is very interested in romance and is looking, though she currently doesn't have anyone or a type in mind. She simply watches for someone who may show an interest in getting to know her better.

Besides herself, Normla's family is mostly compose of women. Two relatives she usually goes to visit would be:

Normla is  light gray colored Sugar Glider who noticeably lacks her large folds of skin connecting her legs and arms. This is because as a proof of character, cut them off of herself at a younger age. She has white colored skin, a plain black nose, and dark gray striped markings randomly placed around her body. Her tail is very long with white on the end and dark rings nearing it. Her eyes are an acidic yellow-green with pink rings in them. She also has thick eyelashes and tan inner ear coloring. For her age, she is endowed at just the proper size.

Normla's hair is her most prized posession, due to it being her weapon in combat. It is white with streaks of red and orange, and she pins most of it up into bun-bows on the top of her head, which she will then pull out, causing them to fall to the bottom of her head and gain a curved, blunt shape. Her bangs spike towards the right with two longer ones curling down to her shoulders.

Normla often wears a pale colored tank top-blouse with red and pink ribbon tied directly below her chest, black skinny jeans, black shoes, and a red ribbon around her neck.

As she isn't afraid of showing off her figure her clothing is often revealing, but not over the top. For winter she tends to put on a form fitting coat with fluffy trim and switches her shoes for boots. For the beach she would wear a simple black or white bikini and maybe bring a pair of sunglasses or sandals. For bed, she usually wears a large shirt and a pair of shorts.

At first glance Normla seems to be perfectly normal and fine-tempered. She comes off as serious and has the ambitions and dreams of becoming a professional surgeon. Charismatic and confident, she tries to come off as prim and proper but she tends to only come off as being hypocritical instead...

It's revealed in due time that Normla is actually a self-medicator with a strange fondness of weapons. She enjoys the occasional drink, but doesn't do drugs or anything like that. She only uses medications she may happen to have laying around and even then knows better then to take something that could be lethal or seriously harm herself. As a result, she doesn't take kindly to people who think they can treat her like she's stupid for persuing such bad habits.

Normla shows interest in romance and the persuit of it, but she is the type to generally keep to herself unless someone shows interest first. In which she may become a little agressive or violent if their interest was to waver. She is mostly nice, but during her self-medication, reveal a more "bitter, matured" side.

A little cynical, but deep down Normla is a total sweety whose sanity has been brought up multiple times.