King Norberto I the Dragon 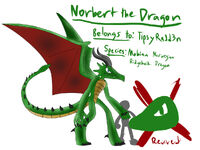 Norbert the Dragon is a character created by TipsyRa1d3n. He is an anthropomorphic European Dragon, very loosely based off of Norberta the Dragon from the Harry Potter series. Norbert is the founder of a group of Mobians known as the Eccentrix. They are a group dedicated to finding Mobians from all over the world who can't fit into regular society (due to having an eccentric personality, bizarre superpower/ability, unusual background, or being an unusual species/race unseen by regular society), and accepting them into their group as a member.

"Norbert was the very first fictional character I had created, and he's come quite a long way from who he originally was. Back then, when I made him at seven years old, he was pretty much an Expy of Sonic the Hedgehog. Same personality, same powers, same super form, and he was even made to be stronger than Sonic! In other words, he started off as a complete Marty Stu. Thankfully that never showed up anywhere on the Internet.

Since that day, Norbert has been developing as a character exponentially, as he develops more unique abilities, a more definable personality, an original backstory...basically EVERYTHING an character should have. A lot of this happened during Role-Playing too, which is where Norb got a lot of his personality!

Now, he's his own person. He has his own set of friends, his own adventures, and his own little group of followers. Suffice it to say, he's come a long way from that Marty Stu I drew over a decade ago."

Norbert comes from an alternate zone than Canon!Sonic (zone as in alternate reality). He hails from a version of Mobius where the world is dominated by the mythical and supernatural. There exist whole populations of vampires, lycans, necromancers, ghosts, and even supernatural hunters to counter the bad eggs among them. They're common enough to come in many varieties, supernatural and hunter alike. Even the canon characters in this zone are different, as Sonic the Hedgehog himself has taken up an occupation as a Supernatural Hunter. Things are different and a lot stranger here.

Yet even in this zone, there are those who stand out and hail as champions. Norbert the Dragon is notable in particular as a veteran which spent over 1,000 years in the making.

During Medieval Ages, there existed a race of Mobian Dragons which inhabited different regions throughout the world. The European Dragons inhabited various regions of Eurish, including the locations of modern-day Albion and Central City. These Dragons were giant, beastly, aggressive, and hostile towards Medieval Mobians whom they considered to be invading their territory. Their relationship was strained at first, but got even worse with the advent of Christianity, which highly clashed with their primitive beliefs and behavior. For years to follow, the Medieval Mobians and Dragons fought each other until at one point, the King of the land ordered Dragons to be slain on sight, believing them to be evil, unholy creatures.

Since that day, some Dragons started to migrate to other, less populated countries. Others decided to hide away from the public eye, their populations remaining unseen for centuries. Unfortunately, among these survivors, thousands of Dragons still perished. Norbert would have been one of these Medieval murder victims, were it not for sheer blind luck.

Before he hatched from his egg, a light breeze caused his egg to roll away from the nest, into a thicket of bushes. Mere minutes after this event did a group of knights break into his family's den, murder his parents, and smash the eggs of his unhatched siblings. This made Norbert the only survivor in his entire family. For the next nine years, he spent his days as little more than a barely sentient wild animal, eating livestock and sleeping under the tall grass. It worked, until one day when he was caught by a duo of knights as a nine-year old whelp. They had very nearly managed to kill him, impaling him on the back and the roof of his mouth with their halberds.

It was here that by sheer luck, he managed to dodge death yet again. This time, via two cloaked women who claimed to have been sent by God himself, to preserve Norbert's life. Because many people those day were extremely religious, and the two cloaked figures happened to recite some very convincing Bible Quotes, they were persuaded to let Norbert live, and keep him alive no matter what. After that, the two women nursed him back to health, gave him a name, and released him into a game-hunting ground in the forest, not too far away from the castle.

For the next 14 years, he lived there, feeding on deer and pheasant rather than the livestock being grown by peasants. He managed to get by just fine, until he reached 23 years old. There, an army of pagans invaded the land, laying siege to it with their deadly weaponry, which was far more advanced than most Medieval weaponry. Seeing Norbert as little more than a beast, they managed to wound him in a failed attempt to kill him. Knowing he couldn't possibly survive this siege for much longer, and that far too many places had fallen victim to these pagans, the King ordered his best wizard to take Norbert, and freeze him inside of a dormant volcano.

While the war waged on outside for decades to come, Norbert remained in a death-like sleep for the next 1,000 years. Only to be awakened once more, in the most unexpected of ways.

A millennium after he was frozen, he awoke unexpectedly due to the volcano he was placed in being reawakened. Specifically by Eggman, as his building an HQ there made the volcano active once again. Since he had not used his body at all for that period of time, he woke up in his cave alone, scared, blind, deaf, numb, and barely able to move. His entire past reduced to little more than a bad dream he can't remember.

It took him days to crawl away from the volcano, and another day of being awake to use his arms and legs. After a week he found himself able to walk and grab things. Albeit the first thing he sensed when he was fully able to use his body again was treasure. In the still untouched King's Vault, there was an entire hoard of gold coins, jewels, adorned armor, silver and golden goblets, and most intriguingly...a golden cross-shaped sword, adorned with gemstones. An old ceremonial weapon which had, for centuries, remained untouched and unwielded.

Norbert found himself interested in this shiny, gem-decorated blade. It just so happened to be another twist of fate that he discovered a spirit residing in the sword. More specifically, the sword's original creator. He explained that this sword is a very powerful Holy Relic, capable of vanquishing almost any evil imaginable. Even if that evil is little more than an undisciplined child. It's far more dangerous than many Holy weapons, so the Spirit in the Sword started communicating with him in an attempt to uncover his character. He spent the next few weeks carrying it around, and this allowed him to discover more about himself. His personality, his feelings towards Mobians with a Dark or Demonic nature, his feelings on Christianity, his love for treasure, and eventually his ego. He found his strengths, and flaws by being with this Spirit for those few weeks. Eventually, Norbert came to a decision.

"I honestly don't know if I'm a Christian kind of guy. It honestly sounds kind of iffy to dedicate my life to slaying these guys, because not ALL of them are bad! Look, I tell you what....I won't slay dark. I'll slay evil. If you think about it, the two are entirely different things. Sometimes you can have a good demon. Sometimes you can have an evil angel. But you know...I think there's been ENOUGH shed blood coming from non-regular Mobians. I think it's time we change things up a bit."

There was the right answer. The ability to distinguish Dark and Supernatural Mobians from actually evil people. A skill that very few, if any people had any ability to see for themselves. Because of this, he had the right to use this sword to its fullest ability, to protect the weak and fight back against the truly wretched. Which, suffice to say, he found trouble much sooner than he expected to.

He has a big ego, as he obviously enjoys having the Eccentrix be identified with a logo shaped just like his head. He likes to inflate his ego too, usually dressing up like a king to make himself the center of attention in a party or a meeting. As well as participating in public speakings, because "I'M GONNA ON TV!!!" He's also greedy, hoarding treasure in a cavern, and being attracted to gold and precious gems to the point of wanting to steal them. That particular habit he's trying to cut on his own.

But aside from being greedy for attention and gold, Norbert is a surprisingly swell person to be around. For starters, he created an entire organization dedicated to taking in people who can't find a place in society, and giving them room and board.

He's all around diplomatic, usually looking to solve problems so that no one gets hurt. He doesn't mind sending in forces to fight for someone, but will never get involved in genocide. Nor will he reduce himself to "one side" because as far as he's concerned, that'd undermine the whole point of him being an accepting, kingly figure. He figures Mobians who are Dark, Demonic or Undead are every bit as Eccentrix-worthy as any other Mobian. Because of this, many of his best friends are Dark or Demonic in nature. His ability to be accepting has made him an adored figure by many people who have affiliated himself with the Eccentrix.

He's not very smart. Nor does he act very mature from time to time, sometimes having tantrums and sulking if someone deflates his big head. Albeit he has his moments of brilliance. Almost but not quite as impressive as his bravery and charisma.

He holds the members of the Eccentrix to extremely high value, and will do just about anything to see them safeguarded and leading a good life. He'd fight an entire ARMY to rescue one member, even give up his own life if need be. He'd pay for their college tuition, or their entire bailout fee if they got sent to jail. He'd cut off an entire alliance if he knew that they hurt ONE of his members. No, he doesn't think about the consequences for these actions. But either way, he figures it'd be completely worth it.

As much as his powers have to do with angels and holy power, Norbert actually is NOT a religious person. He would actually get very offended if you call him a "bible thumper" or anything of the sort, because he himself believes that each person should follow the faith they have dedicated themselves to. IF they're into that stuff. The only exception to that would be anything which requires a virgin sacrifice. Plus, he likes to refer to it as "White Magic, y'know, like Gandalf. Except with more controversy!"

Norbert is an extremely powerful Mobian being. His default weapons are his biological ones, which are powerful enough to qualify as weapons on their own. Albeit his strongest abilities come with his sword, the Northern Light's Claymore.

Believe it or not, he has a lot of these. To counter his ultra-strong abilities, his weaknesses are all very debilitating. Especially given how his body plan is pretty much outdated in comparison to modern Mobians.

Retrieved from "https://sonicfanon.fandom.com/wiki/Norbert_the_Dragon?oldid=1539960"
Community content is available under CC-BY-SA unless otherwise noted.