"If you are traveling to run away, then your attempts at freedom are in vain..."
—Nora Kouba 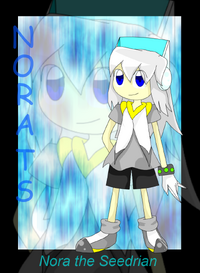 Nora Kouba (the Seedrian) is a traveler of cities, rarely going to the country parts of the world. She carries around a star-shaped guitar which is called Flash Spark 4.0, a prototype touch-screen guitar. It also morphs into the three basic extreme gear (Board, Air Ride and Bike). Nobody knows why it's called 4.0 since it's a prototype, but when asked, Nora just says, "It sounds cool..."

Nora is also known to sleep a lot and be refered to be lazy. However, she seems to be quite aware of her surrondings even when asleep, for the fact she can directly slam her guitar in a person's face without opening a eye. She is also short-tempered and quite aggressive, when she plays it's a bit violent.... Nora's guitar, being indestructable, she uses it as a hammer-like weapon, able to break down brick walls! It is a mystery if ether it's the guitar's indestructablity or Nora is just plain strong! She also could be a thief, since it's a possibilty she stole something SO high-tech as the Flash Spark, but this is no confirmed since she pays what she eats... (By earning money by playing her guitar so well)

Nora also has the ability to purify Chaos Energy, which she can only do with a Chaos emerald. With Purified Energy, she can use it many ways, however, she mostly uses it to fire a giant laser...

"Why use Chaos Control when you can Ride a Gear?" -Nora Kouba

Nora also has a tendancy to call people "blokes" or idoits, which shows, she likes to work alone, or, she lacks social-skills, OR, she has a very rude attitude...

Nora also has high Evasive abilities which makes her quite fast, but distant is short, she is very hard to hit, and her guitar doesn't help ether! She seems over-confident in battle, very cocky and hyper, which goes against her relaxed, lazy nature when traveling...

Nora also has a cousin, Starla Kouba, who is a traveling puppetier, however, Starla is more social then Nora, BY A LOT! Nora also met Sonic before, but they never really got in-touch, they just know each other...

"We don't travel together, but we do cross paths alot..." -Starla Kouba

Nora also now has a travel partner named Hiroaki DaichiMizu, a run-away prince, she rescued him from a ganster while doing payback, and with no where else to go, Hiroaki follows Nora even though Nora can never seem to call him by his real name, she is always calling him, "Raki", or sometimes call him "Stretch" because of his elastic body, and it's thanks to that ability he can keep up with her! It is unknown if Nora and Hiroaki will develop a "Love Relationship", for it could be possible since they have been traveling together for a while now.

"She keeps dropping me off her gear, but I can easily grab back on it... I have the feeling she's trying to make me do something, but I don't know what... Nora has a tendency to give life-lessons by actions... I wonder if she's trying to tell me that having my.... gift... can be helpful..." -Hiroaki DaichiMizu

Nora doesn't have a offical home since she travels, but her main headquarters seem to be Metal City, she also always travels to the Extreme Gear Grand Prix that happens once a year, she is very skilled at it with Flash Arrow, once she won 1st Place after giving a 4th upgrade in her Gear's gravity boosters.

Nora is also known to be good with Chaos Drives and EX Gear, Nora once installed Chaos Drive GB:MX 2100, the newest and most powerful Chaos Drive, into Hiroaki's boots and gauntlets to allow him to have flight, however, like how she got Flash Spark, it is unknown if she really stole such expensive technology, or bought it with saved up money... Even though this was Nora's try at showing she cares about Hiroaki, Hiroaki was in distaste when he saw her messing with his most precious family heirloom, The Royal Daichi no Mizu Gauntlets that were worn by the 1st generation of Daichi no Mizu!.

Attack: Nora changes Flash Arrow into Flash Spark and starts chasing opponents and hitting them on the head with her guitar!

All-Star: Nora takes out a chaos emerald and shifts Flash Drive into Flash Star for top speed, and then she fires a giant lazer, press the Up Button for Nora to do a 360 to attack opponents.

1 of 12
Add photo
Retrieved from "https://sonicfanon.fandom.com/wiki/Nora_Kouba?oldid=1800005"
Community content is available under CC-BY-SA unless otherwise noted.