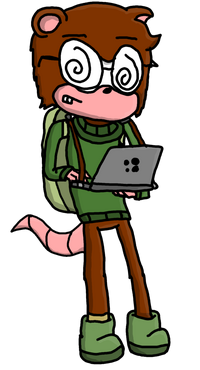 The newest citizen of the city who is quite the smarts and the crave of mozarella cheese!
Basic Info
Name
Noobly the Rat
Full Name
IamNoobly
Nicknames
Ratatatz

Noobly the Rat is a main protagonist of the series Sonic Fanuverse. He has just started his journey on Sonic O' Central. He was recruited by Randomicalz to join the Meme Teme to stop the spammers and vandals who raided the city.

Noobly's theme is a cartoonish look with shading. Noobly wears a green sweater and a lime backpack. He also wears a pair of shoes. Whenever he uses his laptop, two straps appear to keep it in place.

Noobly lived in Junk City with other rats. He was never used to the trash all around, but really liked the R-Tech industries as he believed that it was the only superior place there was. He got his laptop at the age of 12, but the laptop was more that ordinary. A year later, he was framed of hacking into a cheese bank, he was banished from J.C after that.

Entering the city, he noticed a commotion. He was worried so he tried to leave, but Randomicalz came to recruit him to the Meme Teme to stop the evil spammers and vandals, Feeling the need to strengthen up, Noobly accepts.

Noobly is mostly a nerdy type in personality. He hates trash unlike his other bretheren and is nearly a neat-freak.

When he got hold of the R-Tech laptop, he knew lots about hacking and modding and the ability was given to him.

Noobly's main weapon is the R-Tech Swifter Laptop 2014. This laptop gives the user knowledge about hacking and modding. Noobly can input a code to spawn in items aswell.

Retrieved from "https://sonicfanon.fandom.com/wiki/Noobly_the_Rat?oldid=1652754"
Community content is available under CC-BY-SA unless otherwise noted.