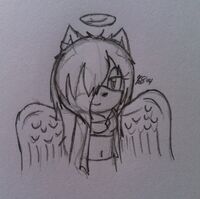 Noire is a gray cat with short, soft fur. She has a long tail with an extra tuft of fur sticking out next to the rounded tip. Her ears are somewhat large, with extra tufts of fur on the tops. Noire has a white-furred muzzle and inner ears. She has long, pitch black hair, with bangs that completely cover her right eye while heaving her left eye visible. In the back, her hair reaches down to her waist. The tips of her bangs are dyed electric lavender. Noire has electric blue eyes. A pair of large, black feathery wings is attached to her back, with a small silver halo occasionally visible floating above her head.

Noire can commonly be seen wearing a purple tank top and skirt of the same color. Her skirt is fairly short, only reaching to about halfway down her thigh. She wears tall, strappy black boots that reach almost up to her knees. Noire wears a white vest that is kept fully open in the front. For accessories, she wears a necklace with a dark purple rhomboidal gem, a silver bracelet on her left hand, and two silver earrings on her right ear.

Noire can easily be describe as childish, whiny, and a brat. She tends to complain when something doesn't go her way, or when she doesn't get something that she wants. She is very immature and can be very bothersome to people. Noire is snobbish and often looks down on others. She doesn't view herself as superior in particular, but the way she talks down to others gives a heavy impression that she does. Noire is very rude and mean for an angel. Despite this, she dislikes arguing and fighting, and is a pacifist. She has a habit of using a lot of foul language, and curses very frequently, occasionally throwing swears into her sentences just to 'spice them up'.

Underneath her harsh exterior, however, Noire has a soft side. She is a romantic and has the potential to be a very caring individual. Although she tends to be rather flirty, deep down she only wants to find real love, and will never even think of doing anything more than flirt with men she doesn't feel something for.

During her life, Noire was much more sweet and kind than her current self. From her childhood, she was adored by both her family and her friends. Her personality severely shifted when she was nineteen years old, after one fateful event when she was in college.

In early February, on the drive back home to visit her family and to take a small break from her schoolwork, Noire got into a car accident when someone pulled out in front of her at an intersection on a country road, and she swerved. In the jolt of surprise from seeing the car suddenly turn in front of her when it shouldn't have, her foot slammed for the brakes. However, moving without thinking, she hit the gas pedal and drove into a tree and high speeds. The crash killed her, and her death was reported to her family back at her hometown.

Unknown to everyone, though, Noire's spirit rose from her body when she died, and she was sent to heaven as an angel. Noire had large white wings and a golden halo, typical of an angel to have. She spent only about a month up in heaven before she began to grow unhappy and missed life back on Earth. Noire decided to pay a small visit back home.

Her visit back to Earth went fairly well at first, but with the world being a very unsafe place, unlike heaven, Noire was bound to get hurt sooner or later. Noire ended up being the victim of a mugging, and was eventually 'killed' after enough resistance. She regenerated within a few hours, after her body was found. Noire had had no idea her body could regenerate and heal itself. Rather than be psychologically scarred from the events of her second death, she decided she'd make her afterlife more interesting. Noire decided to use her angelic abilities to do whatever she wanted, seemingly without any long-term or permanent consequences.

Noire began to become a very rude individual, harassing and insulting others whenever she pleased. She also began to drink heavily, and had gotten into several bar fights in the time of a few months. Noire had also built up a decent tolerance to alcohol, and had used to her advantage the fact that when intoxicated, after about an hour, she would sober up due to her regenerative abilities. She also used this as an excuse for even more alcoholism.

As time went on, Noire grew bored of her life back on Earth, and finally decided to return home to heaven where she felt she belonged. Using her angelic ability, she opened the gates of heaven. Standing at the entrance of the gates was an angel Noire had never seen before. When she tried to pass him, he blocked her way. The angel told her that because of her actions, she would no longer be allowed to enter heaven, and was banished from coming back. He advised her to look at her wings and halo, which had changed from white to black, and gold to silver. The angel left Noire and vanished along with heaven's gates, leaving her to live out on Earth as a fallen angel, free to make as many more poor choices as she wanted.

Being an angel, Noire has the ability to open up the gates to heaven at will. Doing so takes quite a bit of energy from her, as well as causing a bit of physical strain to her body. Over the duration of the time the gates remain open where she causes them to appear, more of her energy is slowly drained. However, this drain of energy is extremely small compared to that when she first opens the gates.

Another ability Noire gained through becoming an angel is regeneration. If Noire gets hurt, or even killed, her body will heal itself rather quickly. The pace of the healing process depends specifically on how badly she was hurt, but even the most severe injuries never take more than a few days to regenerate. Oddly, though, if Noire is killed, it only takes about twenty four full hours for her body to completely heal and her to be revived. 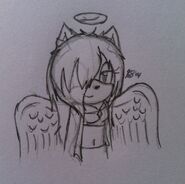 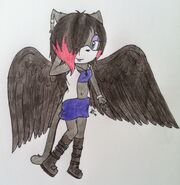 Add a photo to this gallery
Retrieved from "https://sonicfanon.fandom.com/wiki/Noire_the_Cat?oldid=1568777"
Community content is available under CC-BY-SA unless otherwise noted.