Noah the Wolf is a young male Wolf Avatar set to appear in the upcoming story Journey of Brothers. He is a former resident of a small town called Windy Moor Village in Northamera with his blind brother Arrow, but fled when it was destroyed. He and Arrow wound up with the Storm Fighters, with Arrow living in the Wandering Wolf Pack, and Noah remaining in the Storm Fighters. It is mentioned in Shadow of Time that Noah is Stripe's foster brother. 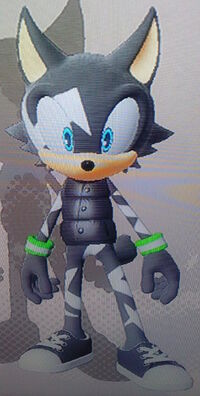 Noah is a young male Wolf Avatar a few years older than Ash the Wolf(as Arrow is around Ash's age). He has dark gray fur, a white streak pattern, and pale blue eyes akin to those of Markus the Hedgehog. He wears a black sleeveless vest, green and white wristbands, and black and white sneakers identical to those of Digger the Dog.

Being an older brother and the only protector of his brother Arrow, Noah is incredibly protective of his handicapped sibling. Like Arrow, Noah flares up angrily when his brother's disability is brought up negatively, and his protector role seems to have made him rather short-tempered.

Before the Series: Noah and Arrow grew up in a small town called Windy Moor Village, which was a frequent and favorite target for the rogues known as the Jackal Squad. Their leader's favorite target for bullying was young Arrow, because of his blindness, and the leader's belief that only the strong should survive. Arrow refused to be cowed by his bullies, and Noah often flared up in defense of his younger brother. After the Jackal Squad left the Village alone, they lived in peace until Infinite made a return with Eggman, destroying the village to instill terror in the residents, and capturing those who didn't die in the attack, Noah and Arrow among them. The two brothers managed to escape and stay in hiding, but lived in fear of Infinite finding them and "finishing the job"(like with the residents of Ocean Point Village). They eventually managed to make it to the Storming Base after the warriors' mission to rescue the Wandering Wolf Pack, but were eventually taken to the Pack because of Arrow's strong belief that they belonged with the Wandering Wolves.

Noah is incredibly protective of his younger brother due to his blindness, and often becomes angry if anyone bullies him or brings up his handicap in a negative light.

Noah came to hate the leader for constantly bullying Arrow, as the leader believed only the strong should survive, and that Arrow was weak because of his blindness. While he never truly knew Infinite after gaining his new identity, Noah hates him for destroying his village.

Noah formed a bond with Stripe, and the two became very close, viewing each other as brothers despite a lack of relation. Stripe likes Noah because of the former loner's confident nature.

Enerjak took an interest in Noah because of his bond with Stripe, at first believing that Noah didn't care much for his actual brother, Arrow, though this was untrue. Noah strongly hates Enerjak for his capture of Stripe, and his interest in the blind Wolf Arrow.

Noah was originally planned to join the Wandering Wolf Pack, but this was changed so that he remains with the Storm Fighters.

Retrieved from "https://sonicfanon.fandom.com/wiki/Noah_the_Wolf?oldid=1817811"
Community content is available under CC-BY-SA unless otherwise noted.