Nile the Cat is a sonic fancharacter created by Jazzy.

She is a yellow anthropomorphic Egyptian Mau Cat known for her grace and beauty. In summary, she is very much a damsel in distress. 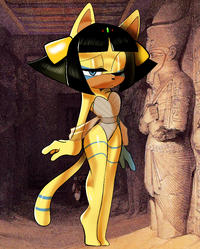 "It is best to keep yourself calm in any situation." - Nile, talking to a child who was separated from his mother.

"Be careful with me.." - Nile before getting help with practicing a fighting style.

Nile is normally explained to be beautiful and graceful. She has a voluptuous/curvy physique, and is well decorated with ancient jewelry. She dons a large rare Willamsite Serpentine specimen and two smaller ruby specimens on her forehead, with a Jade ankle bracelet, all partnered with two large solid gold earrings. Her main attire is made up mostly of a romper threaded with special cloth and silky yet strong bandages, with two transparent sleeves made of sheer fabric drooping below her shoulders. She looks very delicate, due to how she acts and what she wears. Nile's beauty is what is supposed to represent her character the most. Due to this, she has somewhat vaguely sensual paintings of her in ancient temples. She is very exotic and well-groomed in summary. This can sometimes get her into trouble, as villains have often tried to steal and sell her. She has different blue stripes and markings on her thighs, tail, eyes, and back. Her muzzle and the inside of her ears are very tan.

Nile was the child of Randa and Meliya Abadi, the two out of their desert village who were most capable of holding the Regalia Emeralds, gems said to be able to "create miracles". Her village was dying slowly, due to the loss of their water supply. Randa spent most of his life to save them by creating the pleasant river with said Emeralds. After which, Meliya had given birth to Nile next to this river, deeming Nile the Lady of the Pleasant River, and causing her to be it's symbol. She was symbolic for her beauty, her kindness, and her grace. Three things she shared with the river, as said by her villagers. Nile was also the river's 'vessel' - The one who was genetically suited to the river. The river had given her Hydrokinesis and Sunakinesis, the powers of water and sand manipulation, so that she could keep it well maintained. This slightly intimidated her villagers, as they were scared to displease her, despite her not being royalty. Her humble personality in the future eventually had eased this.

Nile died at the young age of 18 from an accident involving a horrible thunder storm, and she was buried in a temple deep under the depths of the Pleasant River. After a few thousand years, Doctor Eggman had brought her back with special technology and the help of a single Regalia Emerald. When she awoke, she found herself being yelled at for the rest, held down by robots. She eventually fills Eggman's base with water, steals the Emerald, and runs off.

Nile is quiet and sweet. She may act somewhat spoiled at times due to how she was treated, and she tries hard to keep a calm and composed demeanor. Nile loves to help out, but she isn't the best fighter. At all. She's normally very curious to present technology and will ask questions frequently. Though she does not condone violence, Nile does not seem to be bothered by bloody justice. She covers her eyes or hides at these moments however. Nile is a typical damsel in distress, usually needing to be defended or saved, but works well as a support to the main hero or such.

Randa and Meliya Abadi (parents) (deceased) Randa and Meliya were loving parents, but they always expected the most out of Nile. While they were uncomfortable about all of the attention Nile got, they assumed she was a gift from the emeralds for the village, and continued to spoil her. Randa always had taught her to stay humble, and be friendly toward anybody who doesn't pose a threat. They never taught her to fight, and they expected her to be a good fighter due to her powers. After Nile had died, this caused them to be shocked and horribly depressed, Randa trying to bring her back but failing, burying her.

Hydrokinesis Nile uses her Hydrokinetic abilities the most; As she likes to make images and statues from water, and will even use these water-manipulating abilities to show her emotion in conversations. She will casually use her hydrokinesis in many scenes. Nile will barely ever fight, but when she does, she possibly utilizes these abilities the most. When she is not fighting, she supports her partner by throwing large waves at the opponent, causing distractions.

Nile rarely uses her Sunakinesis. This was only given to her to maintain the shape of the river, and all she can do is create sand walls to help her partner have an advantage. She has been seen using this ability casually, however, to help create plans and build sand castles.

Nile can be very agile and capable of dodging, causing her to be hard to touch as she supports her partner. She jumps fairly high, and is fairly fast, but not as fast as Sonic, Shadow, or Blaze. Nile is often seen twirling about to dodge blows, and her movements are similar to Contemporary Ballet. She is obviously not extremely built for fighting.

Nile is capable of breathing underwater. Nile has saved Doctor Jay the Hedgehog from drowning deep underwater despite being her enemy; as he is incapable of swimming.

When all of the Regalia Emeralds are collected, she ends up trying her best to create a form much like Super Sonic and Burning Blaze's. Her father was capable of doing this after she died, and she succeeds, but was unable to hold the power, eventually causing her to pass out temporarily. This proves Nile isn't the best person to use as offense in a battle. However, it is implied she will learn how to in the future. This form amplifies her water and earth powers; being able to actually create rivers and lakes simultaneously.

Retrieved from "https://sonicfanon.fandom.com/wiki/Nile_the_Cat?oldid=1778726"
Community content is available under CC-BY-SA unless otherwise noted.