The author of Nikolas the Hedgehog considers this page to be unfinished. As such, some sections may change.

I have unfinished business with you.

— A younger Nikolas towards Elizabeth

Nikolas the Hedgehog is the father to Melissa the Hedgehog, the devout husband to Elizabeth the Hedgehog and is the head librarian in the town Sileo. However, his life was not always full of simplicity and goodness; he used to be the notoriously dangerous criminal known as the Umbra Torrent and he would wreck havoc across Clade with his powerful umbra-electrokinesis.

He was frequently targeted against Salvage, an organization that brings criminals in Clade to justice, due to him always targeting it as well.

Nikolas is a male hedgehog standing at 4' exactly and weighing about 80 pounds. His fur is light brown, while his muzzle, arms, stomach and inner ears are a peach like color. He has heterochromia iridum, with one eye being green and the other being a light brown like color.

He has rather messy, unkempt quills but there usually tends to be three quills on each side of his head. He has a small tuft of hair on his forehead, similar to Melissa but it does not cover any of his eyes.

Nikolas is seen in a green flannel pattern polo shirt, with black business pants to match it. He has a green clip on tie. He wears black business shoes as well. He is not very expressive in what he wears. Due to his nearsightedness, he wears glasses and is never seen with them off.

Nikolas used to be a rather terrible person. While he was never cocky in any regards, he used to be rather reckless and unsympathetic to others' emotions. He never had a regard for anything in the world, other than himself. He was said to only know one emotion, and that was to destroy.

However, he wasn't totally unsalvagable. Nikolas was saved by Elizabeth's metaphorical light, which shows that he was not far from the road to recovery. He could have been best described as a lost soul. Once reformed, he made a rather sharp turnaround in personality. He was always quiet and didn't show much emotion, but once he was married and had a child, he began to show more light and color to him.

He realized that he knew another emotion, and that was love. He harbors a strong love for the thing he cares about a lot; his family. He knows that many people will not view him in the light that his family does, but he would do anything to ensure their safety. They are his whole world and he operates to keep them safe.

Nikolas is very devoted to his wife, and he does everything in his power to remind her that she will never be unloved by him. He keeps a photo of her in his shirt pocket, along with a photo of their daughter. The two are a very strong couple. Much like his wife, he can be quick to be angered but his anger does not last very long.

Unlike Elizabeth who had a relatively alright childhood, Nikolas did not have a fairly decent one. He barely knew his birth parents, as they had died when Nikolas was only three and because of that, he never bonded with them. The causes of their deaths were unknown at the time. He was deemed a ward from Clade officials and spent a while in foster care.

Nikolas was treated fairly by his peers, but there were some occasional kids who treated him poorly. He was about only seven years old when he was taken in by foster parents. Unfortunately, Nikolas felt no connection with them, like his birth parents, and then one day he ran away from them. Because of this, he developed an aversion towards adults and often rebelled against them.

When Nikolas was in his teenage years, he came in contact to scientists in the area. They were looking for the perfect candidate for experimention, but they never specified what they wanted to experiment on. Unfortunately, Nikolas did not have proper working braincells that day because he went along with them back to their labratory.

They were unknown scientists in Clade, probably due to the fact they preformed mostly illegal experimentations. Nikolas did not know that, unfortunately.

Unfortunately, they "woke up" his umbra-electrokinesis rather powerfully with a special syrum they had injected in him. They had become so interested in his power because they realized the syrum could speed up the developing rate of this extraordinary power. The power of the syrum overrode his instinct to fight it off, causing him to activate his transformation early.

He became the Umbra Torrent that night, with his power strengthened and his anger being released. They had created the perfect monster.

This is Nikolas's prime and most powerful ability, being able to manipulate dark electricity at will. For some context, his mother had electrokinesis and his father had umbrakinesis; Nikolas was the result of the two powers meshing together. While he was born with his powers, they were inactive until he was experimented on and forcibly activated, heightening his power and ability.

When known as the Umbra Torrent, he had his umbra-electrokinesis at a rather high power, and he was able to do so much with it. He can create electric bolts at will, but if there is lightning present his power is greatly amplified. He is able to shock his opponents at a greater amplitude and power, potentially shocking and frying them, unlike Melissa who's shocking ability only really leaves a sting.

When Elizabeth, in a sense, "healed" him, the chaotic intensity of his power had decreased. He kept his abilities and still has them, but the strength of them went down.

Attack: 5 - It was originally an 8, until he was "healed" by Elizabeth. Nowadays, due to his old age and not being a fighter anymore, his attacks will not do much to his opponent.

Defense: 9 - Nikolas has a strong instict to protect those that are dear to him, and because of this, he is defensive in personality and also ability. He is able to evade a lot of attacks and he often protects his family.

Speed: 7 - He is averagely fast, but this number was a tad bit higher in his younger years.

Evasion: 9 - He is able to dodge attacks quickly, probably due to his high defense, and he learned a thing or two when he was a teenager.

Intelligence: 8 - Nikolas was actually always intellectually bright; he was just an idiot as a child.

Skills: 7 - Nikolas is average at what he can do that does not involve powers.

Accuracy: 8 - As long as he has his glasses on, his attacks will usually make their way to their opponents.

Stamina: 6 - Nikolas never had a strong body, so he is prone to wearing out pretty fast, like an expired battery.

Tolerance: 8 - Despite having not strong stamina, he can tolerate pain being inflicted on him with more of a headstrong approach. 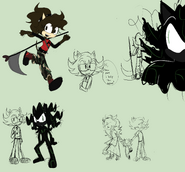 Nikolas (and Umbra Torrent) in some doodles, albeit uncolored
Add a photo to this gallery
Retrieved from "https://sonicfanon.fandom.com/wiki/Nikolas_the_Hedgehog?oldid=1881107"
Community content is available under CC-BY-SA unless otherwise noted.