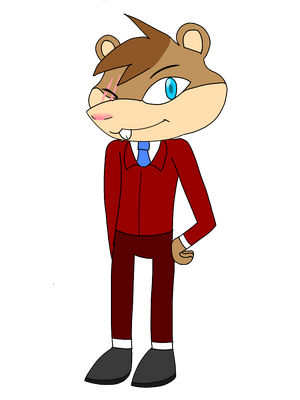 Nikolai is a somewhat tall, lean, Syrian hamster, with light brown fur and cream markings on his face and stomach. He has a tuft of chocolate brown bangs on his head, and one narrow blue eye; he lost his right eye in a fight, which also left two vertical scars. Buck teeth protrude out of his mouth. While hosting, he dons a red suit with darker red pants, black shoes, a white undershirt, and a blue tie.

When Nikolai is hosting, he takes the personality of a game show host; loud, charismatic, quipping jokes, and an overall friendly exterior. However, his true personality is quite different. Outside of hosting, Nikolai is a disgruntled, cynical, and rather stoic man. He shows little sympathy for others, save for a select few individuals. As he is often intoxicated, Nikolai usually comes off as aggressive, impulsive, and even a bit stupid. But he isn't always like this. While his heavy drinking has taken a toll on his thinking, he is still reasonably intelligent, especially when he is sober.

Nikolai Bogdanov was born in a relatively small Russian town, to a Russian mother and Serbian father. His father was a drunkard, just as he would become, and was always coming home late. Nikolai's mother, after a while, could no longer tolerate her husband's behavior, and divorced him, taking Nikolai with her. However, the teenaged Nikolai had started picking up on some of his father's behavior, and began drinking himself. Of course, he kept this a secret to his mother.

Nikolai moved out at the age of 19, and saw more opportunities in the United States than in his home country. So he packed his belongings and bought a plane ticket to the U.S. He intially struggled to find work. After some time, though, Nikolai's efforts paid off, and he landed a job as a fry cook at a fast food joint (he couldn't work as cashier due to his lack of knowing English at the time). As years passed, Niko saw bigger opportunities. Despite having no experience in acting, at age 26, Niko quit his job for a role in the show "Life of Crime". However, his speaking was hard to understand due to his thick accent, and he was dropped off.

Not wanting to give up, Nikolai sought to make himself easier to understand. Niko spent some time with a speech language pathologist, who helped him with his accent. He applied for another role at age 27, but his acting was considered to be subpar. Still desparate for work, he applied for one last job at age 28 for the show "Name That Obscure Dictator". He landed it for good this time, doing better as a host than as an actor.

Nikolai is a ranged fighter, meaning he prefers to fight from a distance. This doesn't mean that he is bad at close ranged combat, however. He takes a strong preference towards using weapons, guns in particular. Specifically, Nikolai uses two assault rifles (going so far as to name them "Saša" and "Natalija"). Nikolai always makes sure that he has enough ammunition with him at all times. He is fairly agile, and can move around quickly. Whenever Niko gets into combat while drunk, he will attack in a blind fit of rage.

Visual application
Add a photo to this gallery
Retrieved from "https://sonicfanon.fandom.com/wiki/Nikolai_the_Hamster/Channel_Mobius?oldid=1845606"
Community content is available under CC-BY-SA unless otherwise noted.