Voted Most Beautiful Female for Winter 2014!

Most people might think that the ability to control fire is more of a curse that a gift. Me? Well, I think it's a good way to heat up a situation. 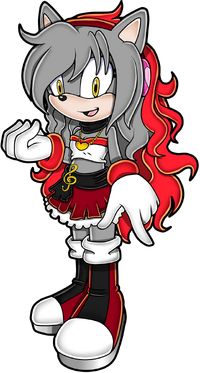 Nikki the Hedgehog(ニッキザヘッジホッグ Nikki za Hejjihoggu) is a fan character made by Nikki-Kaji. Nikki is a song writer and singer. She was born in Arcadia and was mostly raised by her mother. Nikki's parents worked with the king and queen of Arcadia, and they were actually really good friends. Nikki still lives in Arcadia, hanging out with friends and also getting to explore places outside of the royal city.

Nikki is a 18 year-old female hedgehog with grey and red hair. It was originally all grey, until she obtained her pyrokinetic abilities. She is about three feet and weighs 73 pounds. Nikki's eyes are described as a dazzling gold, that always appear to be sparkling when she's happy. The front of her hair appears to reach her shoulders, while the back reaches about the middle of her back. Also, Nikki appears to have hot pink highlights in her red hair that were most likely done herself.

As for her attire, Nikki wears a white crop top with a red trimming at the top, which does not have any sleeves and instead is worn around her chest. She also wears a red skirt with white ruffles, as well as a black belt made out of cloth used for decoration, a musical note pin holding it up. She also wears long, white socks that are long enough to be noticeable under her red and black boots. As for accessories, Nikki wears a black choker (which is actually made out of cotton instead of leather), as well as a golden-heart charm necklace. She also wears wireless hot pink headphones.

Nikki was not born with her pyrokinesis. She obtained them through coming in contact with the everlasting flame; a treasure kept in the basement of the Arcadia Castle for years. Her and Princess Naomi had been wandering through the castle while the adults were outside, and that's when they discovered it. Nikki's curiosity got the best of her, touching the flame, claiming that it did not burn her. But that's when the tiny flame vanished, and Nikki became surrounded in fire. Still, it did not hurt her, and some of her hair changed to the color red.

Later on, the king and queen had discovered what Nikki and Naomi had done, explaining to Nikki's parents what had happened to her. Her red hair is supposed to represent the everlasting flame trapped inside of her. Nikki wasn't aware at the time of what kind of powers this had given her, but soon enough she would find out.

The king and queen did not punish either of the children or Nikki's parents, but simply feared of what might become of the hedgehog. The power of flames is very strong, and could be used for either good or bad. What if the girl decided to fight against them in the future once she gained control of her powers? She could easily take a wrong turn if left untrained.

In Tales of Mobius, what starts off as a normal day for Nikki turns into a brand new adventure. After a threat arises in Kingdom Acorn, a group of heroes are chosen to represent the Kingdom of Arcadia and aid their allies. Nikki was personally chosen by Princess Naomi to join her on the journey, and was the first member of the group. After gaining another four people, the group of six head off to the other side of Mobius.

When they arrive, Nikki becomes a member of the Freedom Fighters, and takes her place as an offensive fighter. With her pyrokinetics, she uses them to fend off against Eggman's robians and protect Mobotropolis.

Project Idol: Nikki's Fun House Nikki is the main playable character in this game to celebrate her birthday! It's a phone app where you get to take care of her and the other characters that are earn-able through purchase. There are games, room decorating, and much more.
The Chaos Chronicles: Trident Trouble In this game, Nikki is one of the main playable characters. She teams up with her friends Starlight, Ryder, and Vexx, along with a new friend, Aster, to track down Poseidon's trident.
Nikki and the Seven Spirits After seven spirits trapped inside of Arcadia have been set loose upon the world, Nikki must go on a quest to take out and capture these spirits before they cause too much chaos. She befriends a nice spirit named Aya, who agrees to help Nikki locate the others spirits. She travels all around the world, meeting new friends and gaining allies that will help her find all seven spirits and regain control of them.

When she was young, Nikki came in contact with the everlasting flame and gained pyrokinesis. She is able to use them at will, generating fire in her hands without feeling pain or burning herself. Nikki can even engulf her entire body in fire and not feel a thing. With her pyrokinetic ability, she is able to also breath fire, or light other things on fire with her mind. If she uses her powers too much, however, they will tire her out.

Nikki is usually a very focused girl, who enjoys having fun and being around others. She enjoys performing on stage, which include singing and dancing in a very goofy, cute way. Despite her somewhat sad history as a kid, Nikki always remembers to keep her head high and look towards the future. Once Nikki's mind is set to something, she always tries her best to accomplish it.

Nikki has the heart of an idol, who is very energetic and cutesy. She had an interest in things like anime and Japanese culture. When she became a member of the school idols in high school, Nikki felt like she finally found a place should express her true personality.

Even though Nikki has pretty much mastered her pyrokinetics, she has a disadvantage against hydrokinetics or water in general. Even though she can swim, she cannot use her powers in water as her flames will simply sizzle out.

Nikki also cannot stand closed spaces, as it causes her to freak out and panic. She looses almost all control of her body in her attempt to escape, causing her to sometimes burst into flames.

Cameron is Nikki's cousin that lives in Station Square. Despite them living far away, Nikki and Cameron stay in touch and now share a strong bond. Occasionally, Nikki performs in Station Square, allowing her to visit her cousin sometimes and spend the entire day with him. 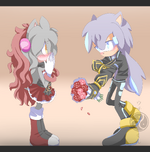 Nikki and Vexx first met a rather strange way, but from the beginning Nikki had grown an interest to the male hedgehog, like why did he fall out of the sky? Or why did his hair glow when he fought? Along with curiosity came a deeper interest. Their first encounter was rather brief, and once Vexx was gone, there was nothing left to prove that he'd been there. Was it all just a dream? Nikki didn't want to think it was just a part of her imagination, hoping that one day she would encounter the mysterious hedgehog again.

One day, that wish came true. While practicing a song in the sakura fields with a clouded mind, Vexx once again appeared, giving her a shock as he ran into the tree beside her. The lovey-dovey feeling returned to Nikki once again, happy to be in the timewalker's presence once again. Not wanting to waste their time together, Nikki invites Vexx on a "date" to the county fair. She was hardy able to contain her feelings anymore as they rode through the tunnel-o-love. As the ride was ended and the kiss cam flash, the two shared a kiss and their relationship was official.

Start a Discussion Discussions about Nikki "Nikkell" the Hedgehog