Lunanstar, the author of Nikiara the Wolf, considers this page to be unfinished. As such, some sections may change.

Nikiara has brown fur, her muzzle, ear isides, and arms are light brown. her hair is dark brown with the tips dyed teal, it reaches to her chin. She also has two tails

Due to Nikiara being the host of Akuma, the Mystic Being of Ghosts, she's able to use his powers for her own use but to a certain limit.

Powers Nikiara was born with or has obtained.

Since Niki is a wolf she is able to do the following:

Niki has a few weaknesses such as: 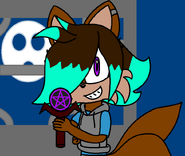 Art Trade with InvisibleCreatures on DeviantArt

Request by OilTheIcePrince on DeviantArt
Add a photo to this gallery

Retrieved from "https://sonicfanon.fandom.com/wiki/Nikiara_the_Wolf?oldid=1656944"
Community content is available under CC-BY-SA unless otherwise noted.