The author of Nike the Moonrat considers this page to be unfinished. As such, some sections may change.

This is an article about Nike the Moonrat, a character created by OkamiKek on 12/19/2017. 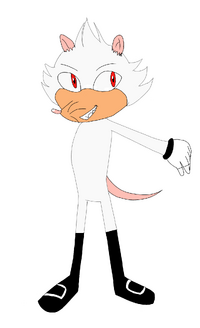 Nike is a white furred moonrat with large, red, separated eyes. He has a long, tan muzzle with smooth cheeks, and sharp teeth. Nike has six whiskers near his pink nose. His ears are somewhat rounded and small. His legs are slightly longer than a hedgehog's. He is a bit taller than Sonic (by two inches, to be exact), and of average weight. Finally, Nike has a medium length, rat-like tail.

Nike wears white, fingerless gloves with black bangles on the cuffs. He also wears black, knee-length boots with white rims on the buckles, and white socks. He wears clear contact lenses as well, due to his poor eyesight from albinism.

Nike is a cocky, egotistical moonrat. He is constantly pushing for success, and hates losing. Nike's greatest passion is sports. He takes this interest of his very seriously, and will go to ridiculous lengths to train. Despite his ego, Nike is friendly towards most people, and polite. Nike is also an extrovert, and get anxious when not around others for a certain period of time. He can seem quite obnoxious to many people due to his loudmouthed nature.

Nike has long legs, so he was born with a good running speed. Nike's long legs also give him an advantage at basketball.

One of Nike's biggest strengths is his skills at sports. He excels at many sports, including basketball, running laps, and swimming. Because Nike is sporty, he is obviously very athletic.

Nike is a normal Mobian, so he does not have any kinetic or magical powers. As a result of this, he is vulnerable in combat against those who do have supernatural powers. It should also be noted that Nike is an albino. As a result of this, his vision is worse than a typical moonrat's. For example, he has a hard time reading text from a distance, and when reading a book or magazine, Nike often holds the text up close to his face so he can read clearly. His eyes are also sensitive to light, and he has poor depth perception.

Nike as drawn by XophPsycho. Thanks a bunch!
Add a photo to this gallery
Retrieved from "https://sonicfanon.fandom.com/wiki/Nike_the_Moonrat?oldid=1845512"
Community content is available under CC-BY-SA unless otherwise noted.