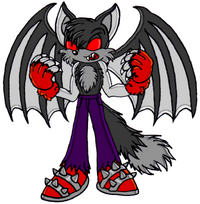 Nightmare is the alter ego and night form of Twilight. The once harmless and innocent Lycalo becomes a mindless and feral monster. He is a combination of Vampire Bat and Werewolf

Twilight becomes three times as heavy and twice the height in this form. All of his teeth become long and pointed with his upper canine teeth being more prominent. Claws form from each of his fingertips which also destroy the fingers of his gloves. His gloves turn red and the cuffs become jagged and ripped. His shoes turn red also and the straps and soles take on a dark gray color. The straps become metallic with 3 spikes adorning each of the tops in place of the buckles. His pants become purple and the bottom of the pant legs are torn, showing a small portion of his now ripped and jagged dark grey socks. His fur becomes long, shaggy and black excluding his gray skinned arms. His ears obtain a gray inner area and become triangularly curved and face outwards. The fur on his stomach, muzzle and the tip of his tail become a dark gray color. His now jet black wings with a gray inner area grow far larger and lose their curved edges, sporting a wingspan of 10 feet. They also become demonic in appearance; obtaining an almost reptilian-like look with four evenly separated spikes protruding from the bottom as well as an equal amount of visible bone ridges. His pupils and irises vanish and his eyes become a soulless glowing red.

Twilight loses all intelligence in this form and speaks with grunts, growls and other primitive noises including his trademark high pitched howl. His voice turns deep and demonic as well and has a faint echoing effect to it. He enters a feral state of mind and possesses a primal and unstoppable rage. He typically attacks any living thing within sight, but around other monsters like himself, he will show a different kind of hostility, especially near prey. He will give them fair warning to back away with a variation of roars and growls before he resorts to violence. Nightmare lacks any other personality aspects aside from those and only has one objective; to feed his relentless hunger and he does so by relying on powerful predator instincts.

His physical strength is increased tenfold and is able to dent thin metal with ease. Thicker materials take time to dent. His speed with attacks he increased to the point they are almost impossible to detect and that combined with his strength can cause severe damage within a matter of seconds. With his teeth, he can take a nasty bite, able to effortlessly penetrate flesh and possibly damage bone. His lower jaw also gains the ability to unhinge for a more lethal and ranged bite. His highly durable claws are only moderately sharp, but it's his strength that makes them deadly. He can easily tear through timber but thicker materials such as steel and metal take more effort to cut through. His speed on foot and in flight are increased with the latter to a greater extent, meaning on foot he can reach 165 mph, and while flying, he can reach speeds up to 400 mph for seemingly limitless amounts of time. His wings can even be used to squeeze his prey to death. His skin becomes rock hard, granting him increased durability. Although a small amount of heavy attacks or several small ones can bring this monster down, the healing factor he has allows him to recover from injury rather quickly and survive fatal wounds. He must feed on blood to survive. As such, the more recent he feeds prior to an injury, the faster he heals. Wounds can heal almost instantly if he feeds while injured. He can survive mutilations so long as he doesn't bleed out or have his brain or heart removed. His senses are heightened dramatically as well, able to see, hear and smell far better than Twilight, allowing him to sense his prey from far distances. His Night Vision is replaced with Infrared Vision and his Echolocation is swapped with an ear-splitting Sonic Scream. While he's unaware of his Umrakinesis, he is frequently seen blending in within the shadows using this ability. Also, he does possess the ability to project a highly damage dealing, dome-shaped blast of dark purple energy that has decent range should he feel threatened enough. With the presence of Death, this is instead replaced with hellish dark flames that inflict far greater damage. Nightmare is a mindless beast who only has one objective and that is to feed his hunger. Not even the effects of garlic, silver, wooden stakes and items of Holiness do not affect him. Furthermore, Nightmare gains immunity from UV lights during a full moon.

This unstoppable monster does have a couple drawbacks. If he is deprived of blood and goes long enough without feeding his hunger, his body will begin to rapidly shut down and eventually enter a comatose state. Cold blood will severely poison him instantly. Being a mindless beast, he isn't much of a strategic fighter, preferring to quickly charge at a foe and overpower them with quick and deadly combos using his fangs and claws. This can put him at a disadvantage against experienced fighters. If enough evil is committed by this monster, Twilight will gain willpower strong enough to possibly control this beast for a short amount of time. This is more likely if loved ones are being attacked and the effects last longer. The hybrid's voice could even be heard in an echoing manner and he can inform any nearby characters to attack with no mercy. Exposure to the sun does not kill him but rather transform him to normal by shrouding him in a blinding white aura where Twilight will be seen moments after.

Retrieved from "https://sonicfanon.fandom.com/wiki/Nightmare_the_Lycalo?oldid=1651360"
Community content is available under CC-BY-SA unless otherwise noted.