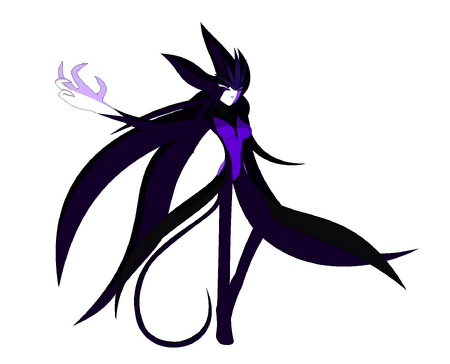 Nightingale the Void is an enigmatic creature shrouded in complete mystery. Her origins are unclear, but claims herself to be darkness incarnate and desires to spread darkness to see if the world is able to either accept or deny.

Nightingale has possesses a dark violet texture with a bright magenta surface on her chest area. Her eyes are a deep blue with dark scelera, and has a white muzzle that extends past her eyes, converging into a five-pronged crest with an additional third eye in the center. Growing from her head are a set off five long "quills" that serve as her hair and each one is fully prehensile and can be manipulated individually and can even extend beyond their normal length. Her elbows feature short blades and her hands end in claws. Her appearance is finished off by a thin, long tail. Her clothes consists of short white gloves with no cuffs, but a small gem on each hand just stopping at the middle. She possess a dark coat that splits down the middle, going off into two coattails with a pair of spikes on each hip. Unlike most characters, she goes barefoot.

Nightingale is a mischevious and curious individual, constantly wearing a very sly expression that exudes confidence in herself and trouble for everyone else. She speaks in a collected tone and tends to whisper certain key words when conversing with another person. While she has not particularly befriended anyone specific, she ultimately does not feel loneliness as simply being in contact with others makes her feel at ease and wants them to understand the darkness and not view it as an enemy. She does however have a distaste for the "light". While she herself tries to conceal nothing, she believes that light itself can be a cruel and deceptive thing

Despite her great power, Nightingale has an aversion to light or positive Chaos-based attacks. A very effective one can even temporarily negate her regeneration capabilities. Because her fighting style is focused on overpowering her opponents, she spends less time dodging and more time practically absorbing them. Her attacks themselves are also very broad and leave little, if any, room for subtlety.

Nightingale is treated more as a boss character and can be confronted at any time a player wishes to, though a traditional RP is possible with the player.

The idea of Nightingale came from a desire to create a character of raw darkness and power, not restricted by any one form and could generally be seen as a boss character of the optional sort. Added with the fact she doesn't lean to either alignment allows her to be an optional foe that could be challenged if confronted. As such, her original sketches displayed many forms of differing sizes rather than settling on a locked down design. The only characteristics that defined her were her pitch black body and trio of glowing eyes.

Shows where the characters have made an appearance.

Retrieved from "https://sonicfanon.fandom.com/wiki/Nightingale_the_Void?oldid=1491622"
Community content is available under CC-BY-SA unless otherwise noted.