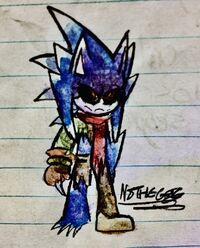 This article is about Nibutu after he was resurrected from death as a Violet. For his life before then, see General Nibutu.

Violet Nibutu's color starts off as indigo from the center of his body, turning lighter as it spreads out until it is white at the tips of his spines. His head, left arm, right index finger, bottom-right torso, and right foot are covered in Violet, giving them a hard, smooth marble-like texture. his ears, left elbow, and right kneecap are pointed with white tips, and his skin is white while his eyes are black with glowing orange pupils, and his eyebrows have some cracks in them. Nibutu has no lips, resulting in his mouth sticking shut and becoming seemingly invisible.

As for his clothes, his red scarf, olive jacket, and flax pants are now torn, burned, and covered in ash, overall dimming and muting their colors and exposing his body to the Violet fungus. His only remaining hickory glove is ripped at its cuff and is missing its index finger, and Nibutu's only gold ring lost its shine from the dirt and ash. His last boot has had its shaft burned away and the details have melted, making the shoe featureless.

Although Nibutu's burning emotions are now set free, he himself is nothing but a trapped and enraged beast in uniform. Ever since he came back to life, he's become vengeful and hateful of the world, losing faith in peace and believing that justice can only be served through ruthless violence. Due to the Violet fungus stimulating him and altering his thinking process, he is much more violent and animalistic than he was before he died.

Nibutu has trouble coming up with strategies of his own, and tends to forget them, however his Violet side is intelligent and calculating. The problem lies within the fact that he and the Violet have different goals, though usually Nibutu is too angry to fight back, allowing the fungus to use him as its pawn.

Despite his fungus-induced barbarism, he is still conscious enough to care for and love his son Zeleo, feel guilt and sorrow, and even recognize that the Violet is manipulating him.

Truthfully, Nibutu is hurt and deeply misses his family.

After his death from Mysung's betrayal, Nibutu's corpse was infected by an alpha Violet fungus spore, which hid on the boots of a man who was retrieving his charred remains. In a few hours on the way to the hospital, Nibutu came back to life and escaped the investigators, determined to find and kill Mysung. While he was hiding in the shadows, he saw that the Jumbotrons on the buildings were labeling Mysung as a hero. He became even more enraged, but this time sought vengeance against France for their misunderstanding as well. He went ahead and began infecting other fallen soldiers and began to terrorize France's police stations and military bases, which further increased the amount of zombies at his disposal.

Nibutu can speak telepathically and is mentally linked to any other Violet zombie. He can also consume raw minerals to convert into Violet and add to his mass, then allowing him to utilize the material by manipulating his body for combat, hunting, or regenerating lost parts. Also, his ring grants him twice as more energy than it would a living person, since the Violet fungus conducts more electricity from the ring, and also allows him to live without his head. Nibutu's fur is hardened too, giving him extra defense, and the spikes extending from his limbs can be used for melee attacks.

Nibutu is very skilled at using the Lipot-Domit, his broadsword, and is also skilled with using his new fungal abilities. He is still an expert in hand-to-hand combat and quick-thinking, and that combined with his new form makes him an extremely dangerous enemy.

Nibutu himself has trouble multitasking, and is easily distracted. Plus, even though he can regenerate himself and use his ring to keep him alive, he ultimately requires his brain to live, and if he is unable to regenerate it in case it's destroyed, then he will die. His body is also rigid and can shatter from heavy impact, although this only delays him. Lastly, Nibutu can be deactivated by electromagnetic pulses or bolts, but this will not kill him as long as he retains his blood. 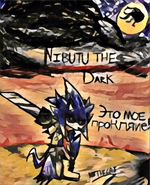 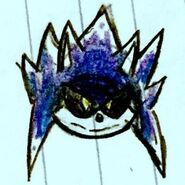 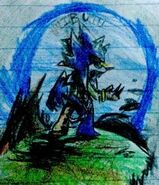 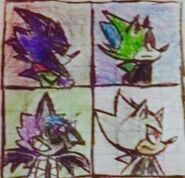 Nibutu as he appears in a Gorillaz parody.

Nibutu as he appears in an attempted redraw of the previous image, with his son Zeleo.

The former character image for this article.

(Bottom right corner, hedgehog with red cape) Nibutu's first ever design.
Add a photo to this gallery
Retrieved from "https://sonicfanon.fandom.com/wiki/Nibutu_the_Dark?oldid=1865789"
Community content is available under CC-BY-SA unless otherwise noted.