This is an article about Nexus the Unknown, a character created by WickedZekrom on 06/7/2015. 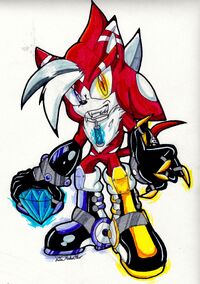 Project Nexus is a Mobian-like genetically created lifeform. His "skin" is mostly maroon and varies in texture, but usually appears somewhat shiny. He has many white markings around his face and a furry white muzzle. He has two tone bangs, one white and one grey. There are grey horns that run down the back of his head and onto his back. His eyes are two different colors, one is yellow with a slit lizard-like pupil and the other is purple with no pupil at all.

Nexus wears specialized gauntlets around his arms that constantly inject special medicines to stop his body from damaging itself. They are big and bulky, black in color with a GUN logo on the top of each one. There are panels on the sides of his gauntlets that hold some of his own blood to prepare it for the next dose of his meds. His boots are of purely aesthetic purposes other than providing armor. They are mostly black with corresponding jewels that sync with the side of the body that they're on.

Nexus is very brash and sinister. He is quiet and keeps his plans to himself, and though he does speak, he oftentimes chooses not to answer questions. Little is known about Nexus' true intentions, but it is known he wants nothing more than revenge on his creators for making his life the miserable way it is. Due to how he is constantly struggling to live, he is quite depressed. He must rely on medication for his own livelihood, thus making his outlook on life rather dark and depressing.

Project Nexus was an experiment created by the Guardian Units of Nations to create a form of the ultimate creature, a being that would withstand anything. At the time Professor Gerald Robotnik was already ahead of the game with his deemed "success" of Project: Shadow. GUN scientists knew entering this task was dangerous and it needed to be watched closely.

Nexus started as a few stem cells in a dish within the Research Labs in GUN's headquarters. Scientists used the technique of gene-splicing to pick and choose special evolutionary genes from many different animals to create this perfect lifeform. The early days of Nexus' growth seemed perfectly normal, and went as planned, until a few small genes mutated from too many genes being spliced together. Slowly Nexus' body formed two conflicting sides as if his cells had two different sets of DNA.Tthis fatal error made Nexus the way he is.

The day Nexus was ready to be released from his chamber, the scientists knew something was wrong when their so-called "perfect life-form" was supposedly fully grown, yet it went limp, suffering as soon as it tried to take its first steps. It opened its eyes revealing what had happened: Nexus was two different types of DNA crammed into one body.

Nexus screamed in pain as his cells began to rapidly attack each other. The scientists were in shock - how could their "ultimate" creature fail right off the bat? The scientists took drastic actions, and began testing the young life-form for its issues. Eventually, an auto immune disorder was discovered, and Nexus was given experimental medication to stop his body from practically tearing itself apart.

The scientists reluctantly had success with the experimental drug, allowing Nexus to live and mature mostly unharmed so he could be educated. Nexus's brain however is different from most normal mobians. He was able to accelerate through normal learning becoming a highly intelligent being. He was tested for IQ and was proven to be superiorly intelligent with an impressive score of 120.

Eventually Nexus discovered that the ultimate plan for him was to become a weapon, and he had other plans. He was sick of the orders he was constantly given and the constant tubes of medication being inserted into him so finally he began to revolt. He created special gauntlets that were able to produce the medication and automatically feed it through him. These were his tickets to getting revenge for his years of suffering! Nexus would begin to take the scientists one by one to their certain doom.

Eventually GUN's Special Forces caught him and officially shut down Project Nexus. He was to be frozen cryogenically and sent to the space colony after it's shutdown to be forgotten forever.

Nexus' antics were never truly explained, nor was he ever proven to be truly evil. To this day all that is known about Nexus is his suffering and struggling to live. One of the last phrases he said to his creators before his capture was this:

"I never wanted to be brought into this world only to suffer constant pain of the errors of the ones who created me. Was it ever so necessary to create this so called 'Ultimate Life' you refer to me as? All of this pain you have put me through, all of the unnecessary tests, experiments... what was your true purpose? All I saw from your eyes was a mind wanting to torture, for this you must pay! For this... I will make YOU suffer!"

From this point on, nothing is truly known of Nexus' whereabouts on the ARK or if he is dead or alive, one thing was however known for certain, Nexus himself wished he would have died before his abusive treatment.

Nexus is granted the ability to control chaos powers through the blue chaos drive that he wears around his neck. This chaos drive is different from the traditional chaos drive colors, Red, Purple, Yellow, and Green. The blue drive sends a different signal than the other four making it seem more like the master emerald in controling the chaos emeralds, except much weaker. This strange blue drive also helps power the gauntlets that he uses to control his medicines.

Nexus's ability to control chaos is much different from that of most Mobians. Due to his split DNA he has two unique frequencies that he uses to communicate with a Chaos Emerald. The left hand side of his body sends a a special frequency for a chaos power known as "chaos beam". Using this attack allows him to fire a chaos charged beam of negative energies that can be used as a projectile. The second frequency comes from his right side, the purple side. This unlocks another ability called "Chaos Blade". This ability allows Nexus to use the Chaos Emerald as a sword for close hand to hand battle. Nexus can only use one of these at a time.

Nexus' most fatal weakness is being without his medication. Without these special meds, he essentially would have his body kill itself due to his cells attacking each other constantly. Other major weaknesses include:

Retrieved from "https://sonicfanon.fandom.com/wiki/Nexus_the_Unknown?oldid=1828537"
Community content is available under CC-BY-SA unless otherwise noted.