Start a Wiki
This is an article about Nexus the Shadow Fiend, a character created by Jaredthefox92 on 06/10/2015. 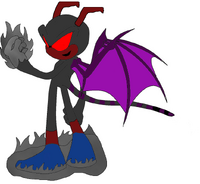 Nexus the Shadow Fiend is a character featured in Jaredthefox92’s sonic fanon series, Flawed Deities. He is a demonic antagonist that serves his father, Arnzarel the Revolting as his own personal assassin and infiltrator. Nexus is a crafty, sadistic, and efficient killer seeking to gain his father’s favor amongst his children. He is often referred to as “The Night Hunter” by mortal humans and other mythological beings as well.

“Nothing to see here.”

Nexus takes the appearance of a shadow fiend, thus he is known to have black colored skin, demonic wings, horns, and a long tail. His tail however  oddly differs in that it is long and doesn’t possess an sort of demonic spiked in, but rather multiple purple rings. Nexus possesses a dark, blood red mussel with matching slanted horns, and demonic red glowing eyes with no pupils of irises. It is believed he sees through the use of his demonic senses, but this is unconfirmed.

Nexus is a sadist in every sense of the word, there is little he enjoys most than a successful and silent kill. He seems to be very ambitious to prove his worth to his father and often comes into conflict with his sister Lilith. Nexus also possesses a slight mischievous and comical side about him, often as he is heard taunting others during battle.

Nexus is known to be erebokinetic, and possess a variety of demonic powers as well. He is able to use these powers to perform his operations and carry out quiet and efficient kills as ordered by his father. Nexus's command of darkness and the shadows cannot be underestimated in combat, otherwise such mistakes could be fatal to his opponents.

Nexus possesses the ability to regenerate and recover his entire body fully,( so long as he is not decapitated.) It takes about a normal mortal hour to regenerate fully though and often he must wait until after a battle is completed and rest so that he may focus to speed up the regeneration process.

Nexus is able to unleash a loud and continuous unholy screech thus disorienting his opponents. He can often use this move to either suppress an opponent or distract them long enough to close in and engage in melee combat.

Self-explanatory, Nexus can uses his wings to fly stealthfully.

Nexus possess distinct supernatural senses that allows him not only to sense the mystical aura within another being, but also allows him to "smell" traces of magic and is even able to smell how pure or corrupt another mortal’s soul is.

Nexus is believed to be able to move and hide within the shadows themselves using his erebokinesis, thus allowing him and multitude of tactical vantage points and places to make a quick and decisive first strike.

Nexus has the erebokinetic ability to cloak himself when he is standing still via manipulation of darkness, however he can be detected with the right methods.

Ability to latch on any surface.

Nexus was created by Arnzarel after the Greater Demon saw need for a silent ant efficient killer. Using the most vile and forbidden of spells Nexus was created to be the giant monstrous demons’ “son”.

Being a Shadow Fiend Nexus works best during the night, thus he is drastically weaker during the sunny daytime in terms of capabilities and options for prefomring his required tasks.While in flight Nexus can be shot at in the wings by a variety of anti-aircraft weaponry. He also seems to be really sensitivive to light as well and bright flashes, such as those emmitted from a flashbang grenade might ward him off for some time.

Retrieved from "https://sonicfanon.fandom.com/wiki/Nexus_the_Shadow_Fiend?oldid=1600982"
Community content is available under CC-BY-SA unless otherwise noted.