Nerin is a crazy and schemeing young cat (though you'd think otherwise by the way she dresses) and is often very antisocial. She doesn't seem to interact with her fellow Moebians very much. She can be cold and severe when she meets certain people and loves to judge them at first glance. She also has very little respect for the people around her and thinks of them very lowly, no matter what their age, gender, level of power, etc. And loves to mess with others, show them up and/or hurt them, these acts often gets her trouble. She also has a tendancy to flirt and/or hit on many men at a time but she seems to have her eyes set on Scourge the Hedgehog. Even though she acts this way, she still has a few "friends" but she often uses most of them as pawns for her own schemes and would rather let them die than help them. She's also an adrenaline junkie, doing any dare, mission, or scheme that could cost her life. Nerin also seems to have an exellent memory. She also has a dry sense of humor and is serious most of the time.

Nerin is always planning and working towards her ultimate goal of becoming "Mistress of the World". She manipulates anyone she meets for her own ends though sometimes has a tendency to provoke them. Although this sometimes gets her in trouble she enjoys finding out what they can do and makes mental notes about all of it with the intention to use it in schemes later. Nerin actually thinking highly of someone is a very rare occurrence. No matter how she's acting towards someone her thoughts are usually the same: that they're lower than her. She's usually sarcastic and can be impatient, making sassy remarks. But she's not opposed to pretending to be nice if it benefits her.

Nerin is fast and has quick reflexes. She has had some combat training and can throw some good kicks and punches. She is very flexible and able to do flips and jumps. In a fight she'll resort to using anything to damage someone which is why she uses the spikes on her gloves. She relies on her chaos abilities a lot using Chaos Spears as a standard attack. It is unknown if she is able to do more powerful attacks like Chaos Blast.

Although Nerin generally flirts with most guys, Scourge is the one she wants. However, he hasn't shown as much interest in her.

Miles is one of Nerin's few friends. Although because of his coniving nature she doesn't trust him completely.

Patch is also one of Nerin's friends, but she'd betray him if need be.

Alicia isn't as much of a friend as she is an ally simply because they're on the same team. Nerin would quickly drop her and doesn't like the relationship she used to have with Scourge.

Slish likes to say Nerin is her "best friend" but in reality Nerin only tolerates her. Their current predicament trapped on Mobius Prime has made them partners. Nerin is the mastermind of the two, just using Slish for some extra "muscle".

Nerin thinks Rosy is an annoying, insane, little girl and hates the way she comes onto Scourge.

Zappy joined the Cat Squad after hearing they are enemies with Team Weasel, who Sparky is friends with. Zappy has a secret crush on Nerin, and has great respect towards her.

Nerin is the anti counterpart of a cat from Mobius Prime. She became green and gained chaos powers due to a dare she did when she was very young involving the master emerald on the sunken island. She was formerly allied with the Supression Squad until one day an accident occured trapping her and Slish the Cat on Mobius Prime. After that she decided she wanted to dominate the prime zone and formed the Cat Squad with Slish and X-Nad . 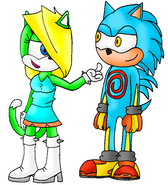 Nerin sprite
Add a photo to this gallery

Twenty years in the future, Nerin is closer than ever to reaching her goal of being 'Mistress of the World'. She does a lot less scheming and experimenting and more actually acting. She is currently building an army under the name, the Future Feline Empire. She is even more ruthless and has ended up demoting her former team mates, turning X-Nad into a stationary defense turret for the base and Slish into a lowly guard. It is quite clear that she cares for no one but herself.

Her physical appearance is pretty much the same. She simply dresses in a more mature manner, wearing dark, evening gown type dresses and heels, with no shortage of bracelets. Her outfits are a lot less combat ready since she leaves most of that to her minions.

Retrieved from "https://sonicfanon.fandom.com/wiki/Nerin_the_Cat?oldid=1780721"
Community content is available under CC-BY-SA unless otherwise noted.