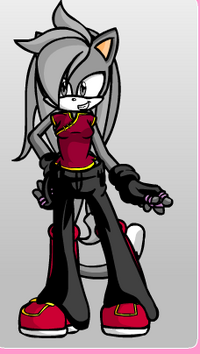 The author of Neo Miyagi Sakura considers this page to be unfinished. As such, some sections may change.

Neo is a character I thought up while I was in a PM with Saren. She is also my main character and one of the lead characters in the Lion's Light prequel.

Neo's fur and hair turns completely silver and her eyes go from multicolor to a silver, a shade darker than her hair. She also wears her ponytail with the end tied off, kind of like Iris's hair except her ponytails fall to her chest in curls.

Neo is a relatively short cat girl with white fur. She has very long hair usually kept in a ponytail that's colored pink, white and brown. Neo wears a pink kimono that hides her bladed fan, which is her primary weapon. On her side, she carries a sheathe for her katana, Seiryu.

In the story, Princess Neo decides that the best way to escape detection from her maids and Butler is to become a "commoner" so she buys a emerald green qipao and gloves and puts her hair into buns and discards her princess tiara by hiding it in a stump behind the house. Her shoes are shoes common during the Qing dynasty in China.

Neo wears a traditional Chinese empress kimono, known as the Dragon robe, colored pink and decorated with cherry blossoms all over and a dragon flying around the stomach. She wears a traditional pheonix crown that seperates her hair into ponytails, likely representing pheonix wings. Her hair by the time she's empress is fully silver with Neapolitan tips, showing that her two sides have joined.

Neo gains a new personality when her emerald activates. She goes from a ditzy, bratty girl to a clam, respectable girl who thinks three moves ahead. Her emerald actually created a false personality, which was dubbed, "Outer Neo" while the real Neo, "Inner Neo" slept on the inside.

Outer Neo is a kind, ditzy girl easily angered. She can be a brat sometimes as she was raised in the castle by her father. Outer Neo is a skilled chef and dancer and will help those in need. She also has a short attention span and can easily become distracted from the conversation but, in times of need like when healing someone, she becomes more serious and knowledgable and can heal someone in only a few minutes to a couple of hours. Outer Neo is more of a healer than a fighter and is a false personality created by her mother's emerald to protect the true Neo.

Inner Neo is a calm, tougher girl who dislikes commoners. She is a "Wolf-Girl" tsundere around Saren and doesn't accept her feelings until she's near death. She is the true Neo but was locked up due to her mother's dying wish being that her daughter have a better childhood and to not remember anything to do with the Ach'Nari. Unlike Outer Neo, Inner Neo is skilled at hand to hand combat and is a horrible chef and dancer, reflecting her tougher personality.

Neo was raised in the Sakura castle alongside her older brother, William, who was suppose to be heir to the Sakura throne, but, an incident involving the Ach'Nari in, which her mother and brother were used as sacrifices for a Forbidden Ritual that could bring back The Dark One since, the ritual required someone of high dark magic, it ultimately failed resulting in her mother's death and her brother's banishment and from that day forward, King Sakura became less power-hungry and more protective of the princess. Neo inherited her mother's emerald and all memories of the Ach'Nari were locked and her whole being changed.

It was the day of her 17th birthday, the day the king announces an heir to the throne, be it commoner or royalty, that day was also the day she met her suitors. Neo didn't want her father to choose her knight in shining armor so she decides to sneak out and ends up going to the village to see what commoners do. She smelled hot pork buns cooking so she decides to buy one and ends up getting taken by some slave traders that's also when she met Saren, who hearing her in distress, killed the slave traders. Neo instantly felt in debt to Saren from that day forward. She asked him to show her around the village and after following him for a while, he said yes but, Neo in her moment of happiness didn't realize that Saren led her to the edge of the village.

Neo has different powers depending on which personality is active, as such Outer Neo is a healer and Inner Neo is a fighter

Skills both of them use

When Neo enters Berserk Mode, she loses a sense of humanity and will attack any and everything, be it friend or foe. Her power also increases during this mode and if she takes too much damage she'll faint and will revert back into regulat Inner Neo.

Neo's bladed fan, which she received from her father on her 10th father, she called her fan Suzaku, and the blades on the fan can easily retract into a harmless fan outside of battle.

Neo's katana, Seiryu, is one of her secondary weapons and can use it to force her light energy into a bladed point.

Neo is weak to ranged attacks as she's more proficient in melee. She is also weak to darkness since it hinder her healing and light creation. She's also has a weakness to food and abandons all fighting if someone mentions food of any sort. If she uses her emerald in excess then she becomes fatigued and sleepy

"D-don't think t-that that d-dance was anything s-special." Inner Neo to Saren after their dance

"I am the princess of the country, DO NOT speak to me that way," After she got into an argument with Saren then, stormed off

"All they see in me is...perfection, I hate being perfect, they just see me, perfect chest, perfect waist, perfect hips minus a little chub onto it, why must I be perfect?"-Outer Neo when she looks at herself in the mirror on her 17th birthday.

"I summon thee, Kitsuna, bring out your good will and help me win this fight!"- Neo, summoning Kitsuna for the first time

"Look boy, the false me might've fallen for you but I won't be seduced so easily." - Inner Neo to Saren after he saved her

Her weapons, Suzaku and Seiryu, comes from one of my favorite mangas, Fushigi Yuugi: The Mysterious Play

Her relationship with Saren, loosely mirrors my own with Saren's creator

Neo's character song is Perfection because, its about her hate with being perfect and being seen as perfect before being rescued by Saren

When Neo's emerald activates, she gains a calmer, tougher demeanor and her hair changes to pure silver and the change is a refrence to Inner/Outer Moka from the Rosario+Vampire series Neo's summons are based off the Golden Keys from Fairy Tail and as such are dubbed, by me, as the Sacred Summons and are summoned from Gold Cards