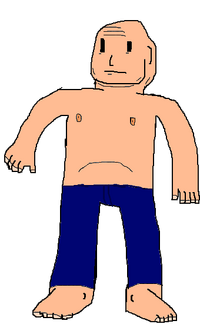 Nelson the Guy is an extremely dumb, fat and bald Caucasian man who somehow became friends with Sonic the Hedgehog. He is actually a discarded clone of Eggman. But who cares?

He is a Caucasian man, obese and hairless. Usually wears a blue jeans.

Dr. Eggman wanted a successor to take over his reign after his deaths. So he started producing several clones using genetic engineering.  most of them were defective, so Eggman threw the clones off a cliff in an attempt to kill them. He almost succeeded,because one of the clones survived. Guess who the clone was? Nelson! Nelson was found by Sonic the hedgehog days later, they became friends and Nelson became Knuckles's roommate. THE END.

Nelson is a lazy, gluttonous, calm and dumb guy. He never thinks straight and is easily manipulated. He is a great fan of old comic books and video games.

Retrieved from "https://sonicfanon.fandom.com/wiki/Nelson_the_Guy?oldid=1864277"
Community content is available under CC-BY-SA unless otherwise noted.