The reason given for cleanup is: Grammar and formatting.

This character is a recolor. Please consider drawing some of your own art, or removing the recolored images.

Neganite the Robot Hedgehog is the doppleganger of Obsolete Scourge The Hedgehog. Neganite was originally going to be a clone, but the idea was scrapped and replaced with an robotic doppleganger. Neganite has half of his robotic self visible, because half of his civillian disguise was burned. 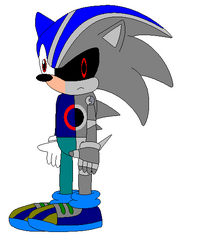 He appears as an blue hedgehog, has half of his robotic skeleton visible, and usually hidden with an cape and half mask.

Neganite's personality is splitted in 2, because The Hell Fire became self-aware and wanted to become part of Neganite.

When Neganite is normal, he stays calm.

When he is in Hell Fire form, he becomes more berserk than before, but he does not notice the difference between foe and friend.

Neganite has an very long history, which can beat any robot's history.

Neganite was created by Paradox to assassinate Obsolete Scourge.

But it took only 2 years to find Ultra City.

He was prepared for the moment, but he got half of himself burned by Fire Arm resulting into having half of the robotic skeleton visible.

Standing Up against Paradox

Nega Changed his name into Neganite after his first failed attack.

Neganite gone to Paradox to get an set of Weapon Arms, but Paradox used metallic pieces to make an invention to eradicate Neganite.

But Neganite went angry when he found out, so he teleported Paradox' Lair to Paradox Dimension.

Neganite had gotten into an battle with Paradox' invention, Metal Paradox.

After lots of punches and kicks, Neganite and Metal Paradox both looked very damaged and shut down.

The reason why they shut down is because the battle was so intense, that their systems could not resist a lot of battle.

Neganite got bored on hell and saw Metal Paradox.

So Neganite gone in the center of Hell to get a piece of the Hell Fire, Nega absorbed the Hell Fire and got out from hell.

Neganite, out from hell, he got bored, so he decided to find a lair (because every villain has a lair according to him).

So he found an cave called Techno Cave. It was abandoned and then Neganite turned the Techno Cave into his lair.

The Techno Cave was destroyed by Obsolete Scourge, but was repaired because Neganite is skilled at building.

These following powers were programmed on Neganite.

Neganite's weakness is water, which is obvious, because he is a robot.

The weakness gets to a stronger effect in Hell Fire Form.

Another weakness is the HellFire Form, which drains his energy.

Retrieved from "https://sonicfanon.fandom.com/wiki/Neganite_the_Robot_Hedgehog?oldid=1610599"
Community content is available under CC-BY-SA unless otherwise noted.