"I am Neferet, Priestess of the Night."
—Introduction.

Nothing is really known about Neferet's early life. She herself, has no recall if she has any family or friends. She only remembers being created by her 'twin's' negative emotions.

Chosen as Priestess of the Night

When she reached the age of 14, she was nominated for the title of Priestess of the Night. She declined the offer three times, but then accepted it when she realised being the Priestess would give her chance to protect her allies. She was chosen by the Goddess Nyx as Priestess and occasionally goes to her temple to pray and look after it.

At age 15, after celebrating a year of being Priestess, Neferet and her group of magicians were captured by a unknown dark force. She was tortured and brainwashed, eventually being controlled by the evil. She met with a young man, who seemed to know Neferet. After explaining to her that he raised her when her carers were out to war, Neferet didn't want to kill the man, but her mind couldn't control her actions. After Neferet crying a bit, the young man told her that he'd die, knowing that the girl he raised up has grown strong. Saying one last good-bye to him, she gave him a quick and painless death.

After managing to break control, this came to her again and she fell into despair. Scarred by her own actions, she took time off the Priestess job, a year's worth. She has not yet recovered and her followers wonder if she ever will.

Path of the Priestess

Neferet has a shade of dark purple for her fur and jet-black hair, which reaches her lower back. Her eyes are known to change colour, sometimes representing how she feels and other times, she does it just for the heck of it. They can change from dark cerise to blue, red, purple and violet. Her current eye-colour is a cranberry-like colour. She has a strange mark on her right shoulder, which goes from part of her neck, partway down her back and slightly down her arm.

Neferet wears a pale purple dress with a black belt. She also wears a black jacket, knee-high boots and tights. She has said herself, that she "prefers the dark gothic-like attire to the goodie-goodie pink dresses which I wouldn't be seen dead in."

Previously, Neferet used to be lively and outgoing. She was kind most of the time and was popular. She had a fondness of little children and loved to be adored.

But, ever since her Magia Gem turned black when she fell into despair, Neferet turned cold, unable to feel emotions such as happiness, love and excitement. She uses the little that's left of herself to stop other people of her clan from falling into despair.

Neferet has a black bow she uses. She has learnt to craft magic into her arrows for extra effect:

Neferet also uses guns to her advantage. She has her trademark ones: Isis (A white pistol) and Ares (a black pistol).

She can also summon things known as 'cursed guns', which are powerful, but can only be used once, which is why she has to summon quite a few of them to take down a strong opponent.

thumb|153px|left|Ave Maria on ViolinNeferet has a talent of playing the violin and piano, as well as singing. She knows 'Ave Maria' better then any other song on the violin.

With a born ability of psychokinesis passed down from Cielia, she is quite skilled. But, if she uses it for too long, it can make her feel weak and fatigue, often leaving her open for attack.

Neferet has said so herself that time-based abilities are dangerous. She wears a limiter to remind her of how much she is using up. Using too much too quickly would cause her to collapse with no memory of the event, at worse, erase her from existance.

Neferet and Aphrodite have a teacher-student relationship. Beings as Aphrodite was Neferet's choice of being Priestess of the Night, she now tutors Aphrodite, in hopes she becomes a better Priestess then Neferet herself is.

It is also noted, that Aphrodite's personality is similiar to that of Neferet's past personality, which could explain why Neferet is so attatched to Aphrodite. The two are like sisters; Neferet never leaves her side and protects her from falling into despair. There have been close times when Aphrodite's Magia Gem did turn black, but Neferet reversed time to stop this from happening each time.

"You've just got to let people make their own mistakes. They will learn from them. But sometimes... you have to make mistakes for them. Take chances, tell white lies, run away from danger. That way, they'll know what they're doing wrong."

"Darkness isn't all bad. It's just prejudice idiots wanting everyone to go to war because they're different." 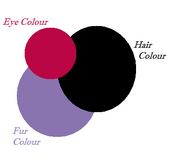 Neferet's Colour Chart
Add a photo to this gallery
Retrieved from "https://sonicfanon.fandom.com/wiki/Neferet_the_Dark?oldid=1356592"
Community content is available under CC-BY-SA unless otherwise noted.