I haven't had the pleasure of meeting you. 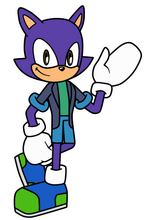 Ned McMuffin is an original, evil, Slate Blue, anthropomorphic Burmilla Cat created by Pumpituppartyzone. He is 98 cm tall and weighs 35 kg. His older brother is Cliff McMuffin and his younger sister is Ginger McMuffin. He is the speed formation of Team Freckles, which consists of himself, D.W. the Rabbit, and Freckles Jeeperchomp (his best friend). He has a "gang" that consits of himself, Freckes, Pool Shark, and Crush the Bandicoot.

Ned was created in 2008, and is somewhat based off of a Toontown Online character design. He was originally supposed to be a black cat named Wade created on Halloween. Pumpituppartyzone couldn't wait until then to create Ned, so he just made him right away. Also, because Wade wasn't a valid name in Toontown (because of the character in Kim Possible), Pumpituppartyzone settled with the name Ned. After he was deleted (most likely to create Moe Flippercorn), he was used as an evil character for an unknown reason.

Ned is usually described as "heartless" or "pure evil," which he takes as compliments. He hates a lot of things; so many that it takes hours to list it all! He is sort of hypocritical; he says that pranks are juvenile, yet he plays them all the time. He usually tries to act too cool for everything, and he pulls it off well. He enjoys scaring people and blackmaling people into doing what he wants. He usually doesn't even think about helping people unless there is something in it for him. The only people that he will help with nothing in return are Freckles and Crush.

Ned is great at tricking people. He is very manipulative, and is good at blackmaling people. He is also a strong fighter. Like most characters, he can use the Spin Jump and Spin Dash, He can use the Spin Claw and Cat Claw. He enjoys using Silly String on people aswell. He can blow a bugle at somebody to make their eardrums explode. He also usually uses a switchblade to stab or even throw at enemies. One rare occasions, he uses a Bad Luck ray to give somebody bad luck for 50 seconds.

Ned is one of the 16 team captains in this game, but he is a secondary captain. His team name is the "Big-B-Ballers", his special pitch is the "Tricky Ball", and his special swing is the "Liar Swing". His default team is the "Freckles Slammers".

Ned has a crush on Fifi, and makes it obvious. He always picks her up and acts like they're dating, which usually creates an awkward silence between the two. Fifi may have an attraction to Ned, because she always sweats when he is around her.

Fifi the Bear (possibly, to an extent)

Ned tries to sweep Fifi off of her feet. Base from http://browse.deviantart.com/?q=sonic%20base&order=9&offset=120#/d2syjey 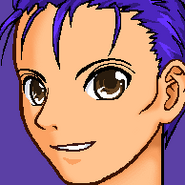 Ned in anime. Made at http://foxrichards.deviantart.com/art/FaceMaker-52755515

A sketch of Desiree and Ned as humans

A sketch of Ned in Sonic Rivals 2 style

Ned in Maxie Rivals
Add a photo to this gallery

"I'm ready when you are." - Acheiving Team Blast

"That was pretty epic." A Rank

"I gave away that win because I was feeling generous." - Loss 2

Retrieved from "https://sonicfanon.fandom.com/wiki/Ned_McMuffin?oldid=1520659"
Community content is available under CC-BY-SA unless otherwise noted.