When no one's by your side, I'll be here for you no matter what. 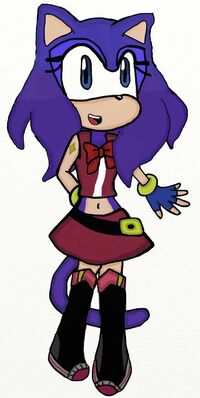 Nebuleen has purple gradient wavy long hair, with a peach muzzle, arms, belly and legs. She has neon purple eye-shadow and sapphire eyes. On her right shoulder, she has a star sign as her birthmark of the Galactia Kingdom princess.

She usually wears a maroon tank top with a white stripe in the center and a red bow as the accessory. Her maroon skirt is attached with a loose belt with a golden buckle and black leather. Her guardian (Aunt Marianne) was the one who made her outfit.

For her other accessories, her golden rings were given by Youra Breeze, saying they were for boosting Nebuleen's powers when necessary during fights. The golden rings are also the source of her powers. For the blue fingerless gloves, they were given by his brother Akido for less damage and comfort.

Her boots were designed by Nezio. It was one of his very first design, giving the ability to skate in zero gravity. To make sure they worked, he decided to give them to her as a birthday gift at the age of 12. When the boots were found to be a success for Nebuleen, he decided to make the boots limited edition. Nebuleen is the only Mobian who wears those shoes, and her boots still fits!

Nebuleen is one of the protagonists who loves to help and save others, even if it means to protect from Dr. Eggman Nega, Dr. Eggman and Metal Sonic's harms. On top of that, she may be clumsy and shy, but she's quick-witted and flexible thanks to her pilate training.

She's not just a beloved Mobian around town, but also a beloved sister to all in Galactia Kingdom. Showing kindness, consideration & caring, it's no wonder her people admire her!

She never planned to stop enemies by fighting back because fighting was not her first option. Enemies tried to destroy her kingdom during her time, and hurt many people. Realizing this, she trained hard in order to maintain safety and keeping away harm from the opponents.

She was given a very special nickname by Cory, which was, "Ms. Who-Goes-Lucky all the Time" since she can get lucky most of the time even though she experienced death.

Before she was just a hero back in Aquatic Capital, she was a princess of the Galactia Kingdom in the Andromeda Galaxy which was ruled by King Zaerus and Queen Lenara. Being a princess was not just learning how to earn royalty, but also earning respect from the royal subjects and protecting her kingdom at all costs. Nebuleen loved her kingdom dearly for its ways, scenery, culture, and more.

Sadly one day, Dr. Eggman Nega and his droids came in to destroy her kingdom by teleporting from the future. The guards tried to stop them, but they were outnumbered, and Eggman Nega's technology was too powerful to be defeated. When Nebuleen came to stop Eggman Nega, she finally succeeded but ended up in terrible pain.

Zaerus and Lenara tried their best as they could to recover Nebuleen with every kind of medication, even with magic. Nothing seemed to help Nebuleen recover, and the king and queen were starting to lose hope. A few days later, Nebuleen died which made all of Galactia mourn for her loss. After Nebuleen's death, tiny fragments of her were slowly gathered and regenerated her due to galactic sorcery.

Nebuleen happened to fall down to Mobius like a shooting star, right at Emerald Coast. Marianne coincidentally went there for a vacation trip (when Akido's parents were still alive ), and when she saw Nebuleen, she decided to raise her like her own daughter, not wanting to abandon her.

One week later, she was raised in a warm home back in Aquatic Capital, along with Akido. She felt like a normal Mobian living with welcoming parents, even though it was just a guardian and an older brother. Of course, Nebuleen's memories were blurry at that time, but her bond between them was so close that she would never forget the feeling.

At the age of five, Nebuleen met Youra when she moved to Aquatic Capital and ever since then, the two became the best of friends. Years later, she gained her galactic powers back naturally, which surprised them both. Nebuleen started to feel Marianne as a true mother and Akido as the best brother she could ever have. She mastered hydrokinesis from him.

Finally at the age of 16, she decided to gather recruits, forming an alliance called "Rescue Missionary". Nebuleen and Youra agreed to this, so they started things slowly. They invited Akido first. Then they invited Nezo (Youra's cousin), Xeon the Lynx and Cory the Hedgecat. She was Nebuleen's toughest rival and an unexpected obstacle. Cory was a hothead at that time, so things were harder for the two. Through those fights and challenges, Youra finally managed to beat Cory during the Final Showdown in Chun-Nan.

With the recruits she gathered, they fought against Eggman together, saving Mobians from harm. Throughout her adventures, she also participates in Extreme Gear Competitions, since she's into those kinds of sports. Nebuleen never gets bored getting into adventures & saving Mobians with her buddies alongside.

Born with powers from the past until now, she develops it from time to time with herself taught previous trainings and knowledge. She was born with dark magic and healing powers from King Zaerus and Queen Lenara, since she's the king and queen's daughter. Master Martiel, one of Galactia's Sorcerer and a teacher to her, Master Martiel has been teaching Nebuleen to adapt with her powers at the age of 5.

When she was reborn at Aquatic Capital, her brother Akido taught her hydrokinesis to learn her aquatic surroundings and master the element. With her knowledge, she's evolving herself as she grows up while maintaining her powers. In the future, Aunt Marianne can already tell she's mastering her magical powers as she notices Nebuleen's training with Akido each and every day.

All of the powers she uses during fights are always for good purposes.

Nebuleen has speed ability, which was approved that she can beat Cory in a race and can keep up with Akido, her own brother. She may not be as fast as the main cast but she's a good runner, especially in Extreme Gear races and running races.

Nebuleen also does gymnastics, pilates & acrobatics back in Andromeda. Her flexibility seems to be increasing and it is one of her main abilities, even up till now.

She's also weak when someone uses pyrokinesis because Nebuleen can't resist heat. Nevertheless, she's still mastering all of the elements, especially when she has to conquer her weaknesses.

Retrieved from "https://sonicfanon.fandom.com/wiki/Nebuleen_the_Cat?oldid=1800720"
Community content is available under CC-BY-SA unless otherwise noted.